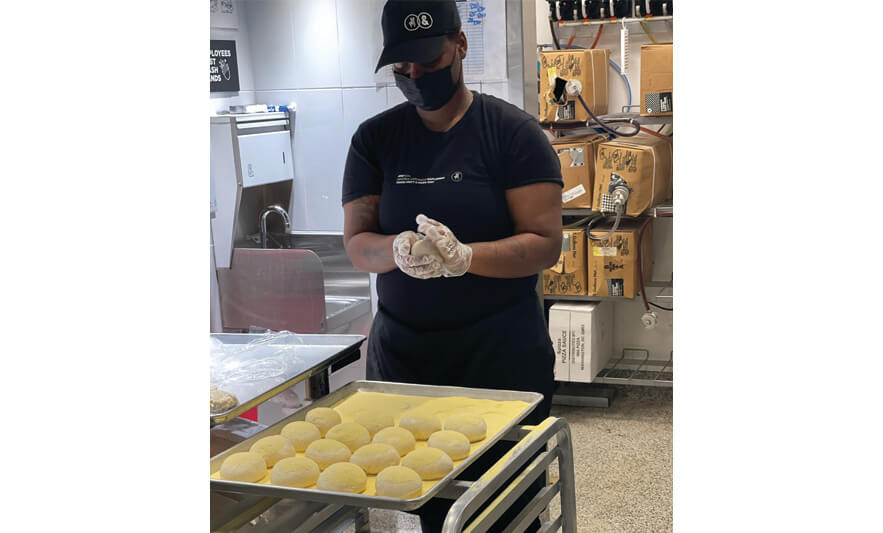 Newark resident Messiah Anderson attended NCCTI, earning a high school diploma and culinary arts certifications. She now has a job as a certified trainer at a restaurant.

Anderson was introduced to NCCTI when she was 16. She had dropped out of high school and her mother suggested she join Job Corps, which is a program that helps eligible young people complete their high school education, trains them for careers and assists them with obtaining employment throughout the United States. When Anderson went to fill out the Job Corps application with her mother, she met Aziza Johnson, who serves as the admissions representative for NCCTI.

“When we went downtown to fill out the application we met Ms. Johnson who was there filling out her own paperwork,” Anderson said.

Johnson shared information about NCCTI with Anderson’s mother who was a bit skeptical at first. As they continued their conversation in the Job Corps office, Johnson soon won over Anderson and her mother’s trust, promising she would watch out for Anderson and help her if she attended NCCTI’s High School Equivalency (HSE) program. From there, Anderson enrolled.

The start of her journey at NCCTI began with getting her high school diploma.

“I dropped out of high school my freshman year,” Anderson said.

She spoke about being a troubled teen and not even wanting to go to school. But attending the HSE program ultimately changed Anderson’s life for the better.

“A lot of jobs you can’t even work without a high school diploma, and the HSE instructor, Ms. Phillip, helped me,” she said.

Anderson shared how grateful she was for how NCCTI staff members stepped in during hard times, particularly HSE instructor Odette Phillip.

“At the time me and my mother were going through so much and Ms. Phillip gave me that motherly love that made me enjoy coming to school, and coming to her class.”

While she was in the program to earn her high school diploma, Anderson noticed the many career and technical programs NCCTI had to offer, with one standing out to her.

“I always was highly fond of being in a kitchen,” she said. “Growing up, at a young age, I used to always be in the kitchen with my great grandmother cooking with her.”

Anderson decided to continue her education at NCCTI in the Culinary Arts Specialist program. She said, “I always had a dream to cook,” and once she found out that there was a culinary program she was even more determined to get her high school diploma so that she could enroll in the culinary classes.

The Culinary Arts Specialist program launched Anderson into a culinary career. After completing the program, she became an entry-level cook at a restaurant. After excelling in that role, she was promoted to a certified trainer, which means she now trains new hires. There is also the possibility of her getting promoted further.

“It was so hands-on, and I felt like that was the best way for me to learn. It made me the person I am today,” Anderson said of the Culinary Arts Specialist program. “It helped me build my character, respect authority and so many other different things.”

Though the outcome was positive, it wasn’t always easy for Anderson.

Anderson is grateful she met Johnson and took the course she did.

“I remember when I first saw Ms. Johnson, and how she’s the reason why I didn’t get shipped off anywhere to go to school,” Anderson said. “Because of her, I was able to stay home and go to school.”

She raved about the entire NCCTI staff, including NCCTI Director Rodney Brutton and support staff.

“From Ms. Phillip to Ms. Johnson to the security guard at the front desk to Mr. Rodney, everybody, it was just marvelous,” said Anderson.

When asked to give some words of wisdom to someone who may be in the shoes of her past, Anderson gave this advice: “It’s a lot of people in this world that’s going to try to knock you down, and try to make you feel as though you’re not able to do it but the only thing that can make you do it is yourself, the only person that can knock you down is yourself. You’re also the only person that can pick you up.”

As for the future, Anderson hopes to exercise her entrepreneurial spirit and open up her own catering business.