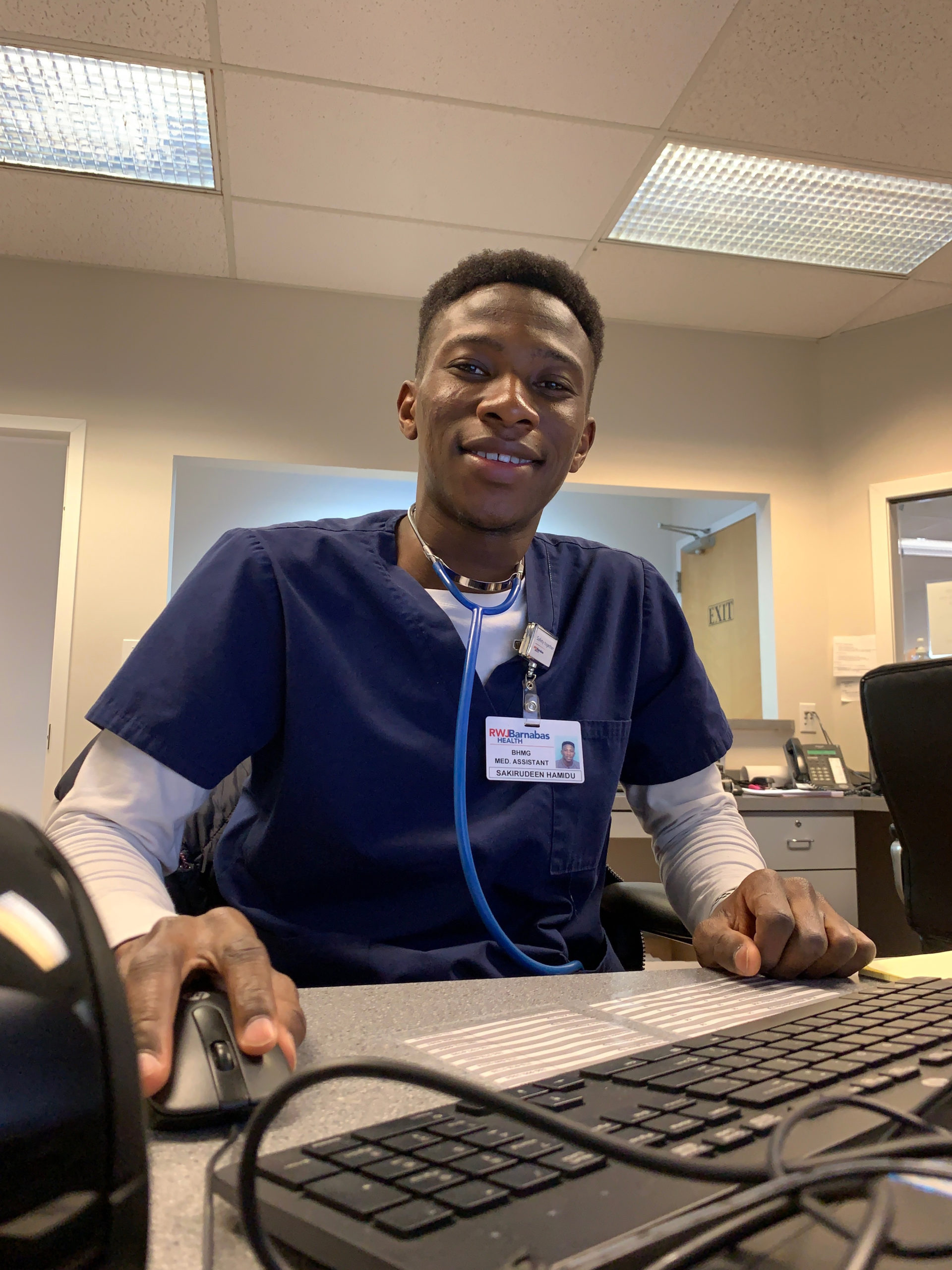 Sakirudeen Hamidu has always had a passion for helping the sick and decided he wanted to make it his career. He graduated from New Community Career & Technical Institute (NCCTI) in 2019 and now works at RWJBarnabas Health Medical Group. He hopes to continue his education through med school.

Hamidu began his studies in Ghana, West Africa, where he was born and raised. When he came to the United States in 2018, he knew he wanted to pursue a career in the medical field in this country. He was living with his cousin at the time and spoke about his goals. His cousin, who is a nephew of New Community Board Chairman Dr. A. Zachary Yamba, suggested NCCTI and brought him to the school.

When he saw the facility and learned more about the Clinical Medical Assistant (CMA) program, Hamidu decided to enroll to take the first step in his medical career.

It was a decision Hamidu is happy he made. He graduated from the CMA program and began working at RWJBarnabas Health Medical Group in October 2019. He is a medical assistant and works out of three doctors’ offices: in Newark, Clark and Edison. As part of his job, he checks patients in and out, checks their vital signs, takes their medical history, draws blood and conducts in-office tests including rapid strep and flu tests.

“Once you find yourself doing what you want, there is nothing to complain about,” Hamidu said.

While he enjoys his work, Hamidu is continuing his education. He is currently taking prerequisite courses at Essex County College at night and hopes to transfer to Rutgers University to pursue a premed bachelor’s degree. Though he hasn’t decided what area of the medical field to specialize in, he is interested in the area of cardiology.

“Sakirudeen is bright and has a wonderful future in the health care field,” said NCCTI Director Rodney Brutton. “He brought his prior educational experience with him to NCCTI and his willingness to share his knowledge to enhance the learning experience of his classmates should be applauded.”

Hamidu said the environment at NCCTI was a perfect fit for him. He said his instructor, Dr. Seham Abouelhassan, was exceptional, making sure students understood the topics and providing a warm and welcoming classroom.

“When I had to speak in class, she made me comfortable,” Hamidu said. “She helped me a lot.”

Abouelhassan said Hamidu was one of her best students.

“Sakirudeen has proved to be responsible, punctual and meticulous, always willing to learn and showed great potential in both academic and practical skills,” she said. “Sakirudeen is diligent and motivated to achieve his goals. He has a pleasant personality and he gets along with others so his classmates liked and respected him. I know that he still has more ambitions and I know he will be fulfilling them soon.”

Working a full-time job and going to school isn’t easy, but Hamidu is used to juggling school and work. When enrolled at NCCTI, he attended class during the day and worked a night shift. After finishing a shift, there was no time to sleep. He would shower and go right to school. Though it was a difficult schedule, he said it was what he had to do to fulfill his goal.

“I tried to be consistent and just sacrifice and go to school,” he said.

The hard work paid off and with the help of NCCTI staff members, Hamidu was able to secure full-time work in his field of study.

NCCTI provided Hamidu with a recommendation and guidance prior to his interview, which helped him get hired.

Because of his positive experience, Hamidu recommends NCCTI to his friends and anyone interested in continuing their education.

“NCCTI has been a great start for me,” he said.