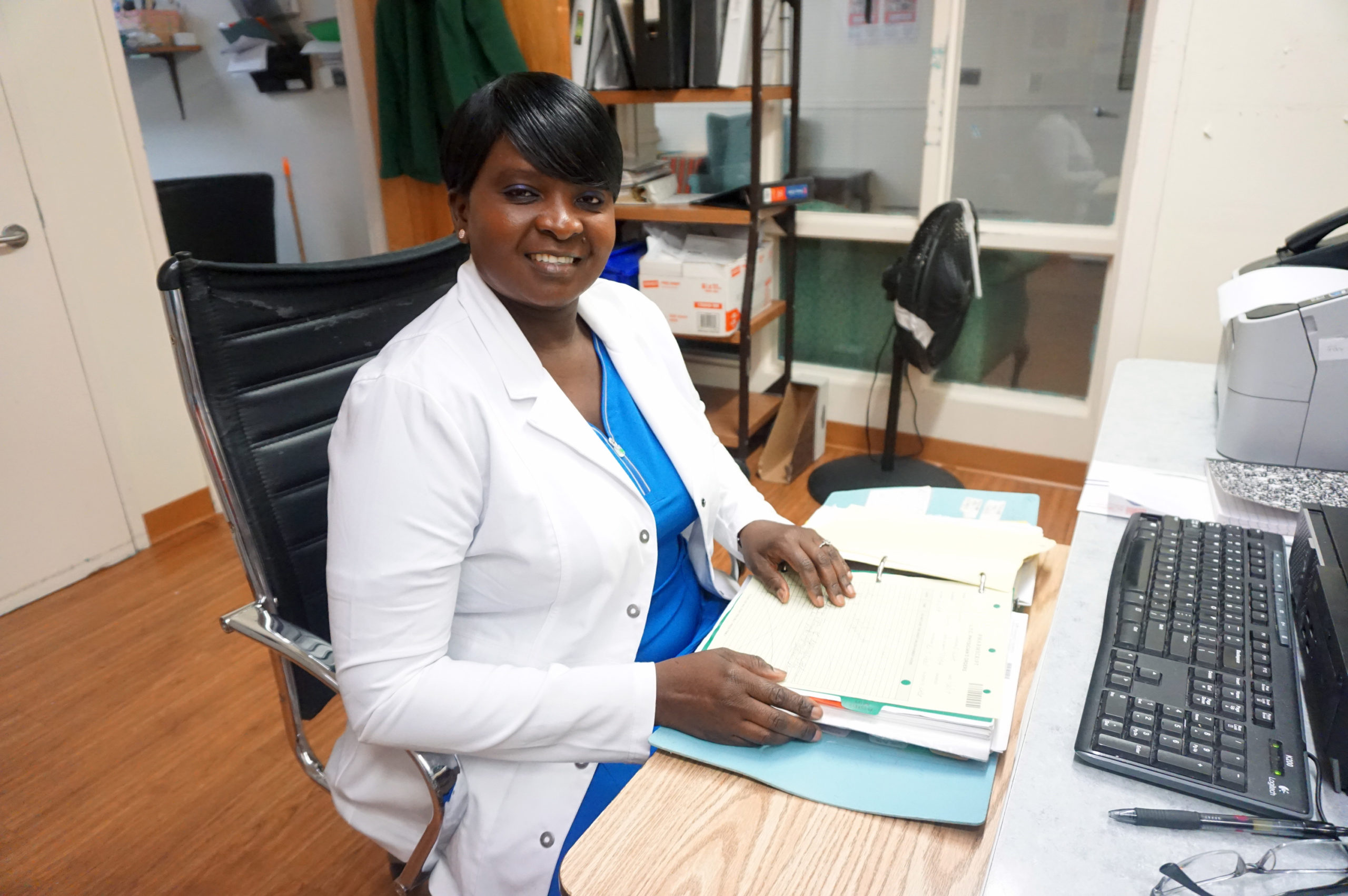 Joyce Misiani completed her studies this summer to become a registered nurse. She is grateful to New Community for helping her during a difficult time in her life, hiring her to start her career in health care and making it possible for her to become an RN. She has worked at Extended Care for about a decade and plans to stay at the facility.

Joyce Misiani has faced numerous challenges since coming to New Jersey from Kenya about 15 years ago. New Community has helped her through difficult times and provided support that has enabled her to have a successful career in health care as a registered nurse.

Misiani first became involved with New Community when she enrolled in the licensed practical nurse (LPN) program it used to offer. She was working a security job while living in Newark and decided she wanted to obtain a certification in the nursing field. New Community’s program was the closest to where she was living, so she enrolled.

Shortly after joining the program, Misiani became homeless. She was staying in a friend’s basement with her daughters and her grades began to slip. Her instructor, Ellen Boddie, noticed something was wrong and questioned her about it. Although she resisted at first, Misiani eventually told Boddie what was going on. Boddie reached out to NCC Board Member and Outreach Coordinator Madge Wilson about the situation and they helped Misiani get placed at Harmony House, NCC’s transitional housing for homeless families.

From Harmony House, Wilson helped Misiani get an NCC apartment on Bruce Street. Even during the moves, Misiani continued attending the LPN program with encouragement from Boddie. She said her grades began to improve after she obtained permanent housing.

One of Misiani’s classmates told her she would be a good candidate for Habitat for Humanity, a nonprofit organization that helps families build and improve places to call home. She did her research and visited a local office to see if she would qualify. She did and was accepted into the program. For two and a half years, Misiani helped build her house, along with several others, using what Habitat for Humanity calls “sweat equity” for payment. At the end, she became a homeowner of a home in Irvington, where she lives today.

After Misiani completed the LPN program, she was hired at New Community Extended Care. She was a good employee and dedicated to her work and the residents at the facility. Extended Care Administrator Veronica Onwunaka, who served as the Director of Nursing at the time, took notice.

“She cares about people and she shows a lot of dedication and that was why, when I saw and noticed that she could do more and she has the tools and the knowledge in her to do more, I spoke with Monsignor about training her to become a registered nurse,” Onwunaka said.

Monsignor William J. Linder, founder of New Community, who lived the last years of his life at Extended Care, encouraged Misiani to return to school and become an RN.

“I couldn’t be what I am today if it were not for him,” Misiani said.

He insisted Misiani apply to colleges, even telling her that she had to take a day off work to complete applications. She planned to continue her education, but it was difficult as a single mother of four girls. Monsignor insisted and Misiani settled on Chamberlain University in New Brunswick. She received a scholarship from New Community to attend.

Obtaining her bachelor’s degree certainly wasn’t easy. She continued working and felt guilty that she wasn’t spending as much time with her four daughters as she thought she should. But she said it was a sacrifice that was necessary to improve her family’s life. And she didn’t want to let anyone down.

“So many times I wanted to just quit. So many things happening,” Misiani said. “But then I kept saying, if I quit Monsignor really went out of his way. This is just too much to lose. It’s a lot of money. Just study hard.”

The hard work paid off. Misiani is now a registered nurse and is still working at Extended Care as an assistant unit manager.

“I said I have to come back. How else can you really say thank you?” she said. “NCC has really shaped me. Because if I weren’t here, I don’t know where I would be. I will always be grateful.”

Wilson said she was happy to help Misiani find an apartment and remembers providing her children with gifts for Christmas.

“She’s a good worker but she is also a mother who loves her four children. Even though she is a single mom, she takes care of her children,” Wilson said. “When I heard she had become a registered nurse, I was happy for her.”

Misiani is relieved that she has completed her studies and is now able to spend more time with her four daughters, who she said were extremely happy when she graduated. Her oldest daughter, who is 24, lives with her full-time and was a recipient of the Monsignor William J. Linder Scholarship for her high school education. Misiani’s three younger daughters, twins who are 13 and a younger girl who is 11, attend boarding school in Pennsylvania and are home for summers and holiday breaks.

“I feel like I’m so blessed. Because when you start, you’re so miserable, desperate. There are times you feel like you’re just nothing,” Misiani said. “I’m honored to be one of Monsignor’s recipients of the scholarship. I don’t know how to put it into words but I really thank God for everything.”