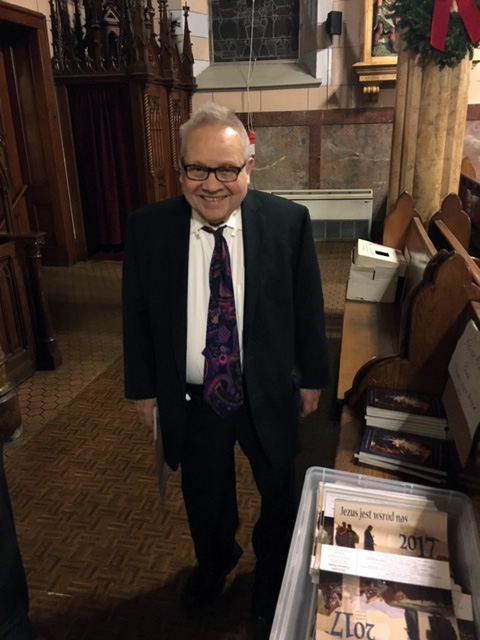 Jose “Joe” Rodriguez worked at New Community for nearly 33 years before his retirement in January. He passed away Aug. 10 at the age of 84. Photo courtesy of Anne Marie Ventura.

Many who are part of the New Community network know the name Joe Rodriguez. He served as the executive chef for the organization for nearly 33 years. He passed away Aug. 10 at the age of 84.
Rodriguez retired this past January, working well beyond the age when people typically retire.
“He was a hard worker. And he loved New Community, that’s for sure,” said daughter Anne Marie Ventura. “He liked the work and he liked the people. He made a home there.”
NCC’s late founder Monsignor William J. Linder hired Rodriguez to be the chef to oversee the opening of the Priory Restaurant. About five years later, Rodriguez was transferred to Extended Care where he remained for the rest of his NCC career. He oversaw the meals prepared for the nursing home residents in addition to preparing meals for NCC special events and several schools NCC served.
“It isn’t often that you see the dedication that Joe Rodriguez brought to NCC every day for almost 33 years,” said New Community CEO Richard Rohrman. “I never heard a harsh word come out of Joe’s mouth. He was truly part of the NCC fabric. Every meal that Joe produced was important. He will be missed by all of us.”
Ventura said Rodriguez loved to cook, even when he wasn’t working. She said he would cook for his family and for parties hosted by family members and friends.
“I’m looking through all his things and behind every little paper, there’s a menu,” she said.
In addition to his love of cooking, Rodriguez enjoyed helping others. He fed the homeless at his church, Immaculate Conception in Elizabeth, about once a month and spent Thanksgivings cooking turkeys for those in need.
“Joe loved his job and cooking was a passion of his,” said New Community Board Member and Outreach Coordinator Madge Wilson. “He exuded a little ray of sunshine each time that I saw him. He was an exceptional and extraordinary person.”
Ventura said Rodriguez was a good father and was dedicated to his family. He was very close with his wife who passed away in 2015. Rodriguez leaves behind three daughters and eight grandchildren.
“He was a real family man. He just always wanted to make us happy and he was very generous. He was always there for us,” Ventura said. “He was a funny guy but he was very strong willed and very religious.”
Rodriguez was in the seminary for a time.
“He really had some strong Catholic values and he instilled them in all of us,” Ventura said.
Rodriguez had great respect for Monsignor Linder, who often made requests for his food.
“My dad made some amazing soups and pastries,” Ventura said. “And Father Linder would put his orders in.”
Rodriguez also had a strong work ethic, rarely taking time off. He would even travel to work in a snowstorm to make sure food was prepared at Extended Care.
Even in retirement, Rodriguez continued to cook. He planned a July 4 barbecue with his family that included king crab legs, clams casino, spare ribs and fried chicken. He wasn’t feeling well when the day came, but the family pitched in by following his instructions and pulled everything together.
“He was very proud to show off his food and also that we helped him,” Ventura said.
New Community will host a Memorial Mass in Rodriguez’s honor Sept. 27 at 4 p.m. at St. Joseph Plaza.
Tags: Anne Marie Ventura, Catholic, Catholic values, Elizabeth, Extended Care, Father Linder, Immaculate Conception, Joe Rodriguez, Madge Wilson, Monsignor Linder, Monsignor William J. Linder, NCC, New Community, Priory Restaurant, Richard Rohrman, St. Joseph Plaza