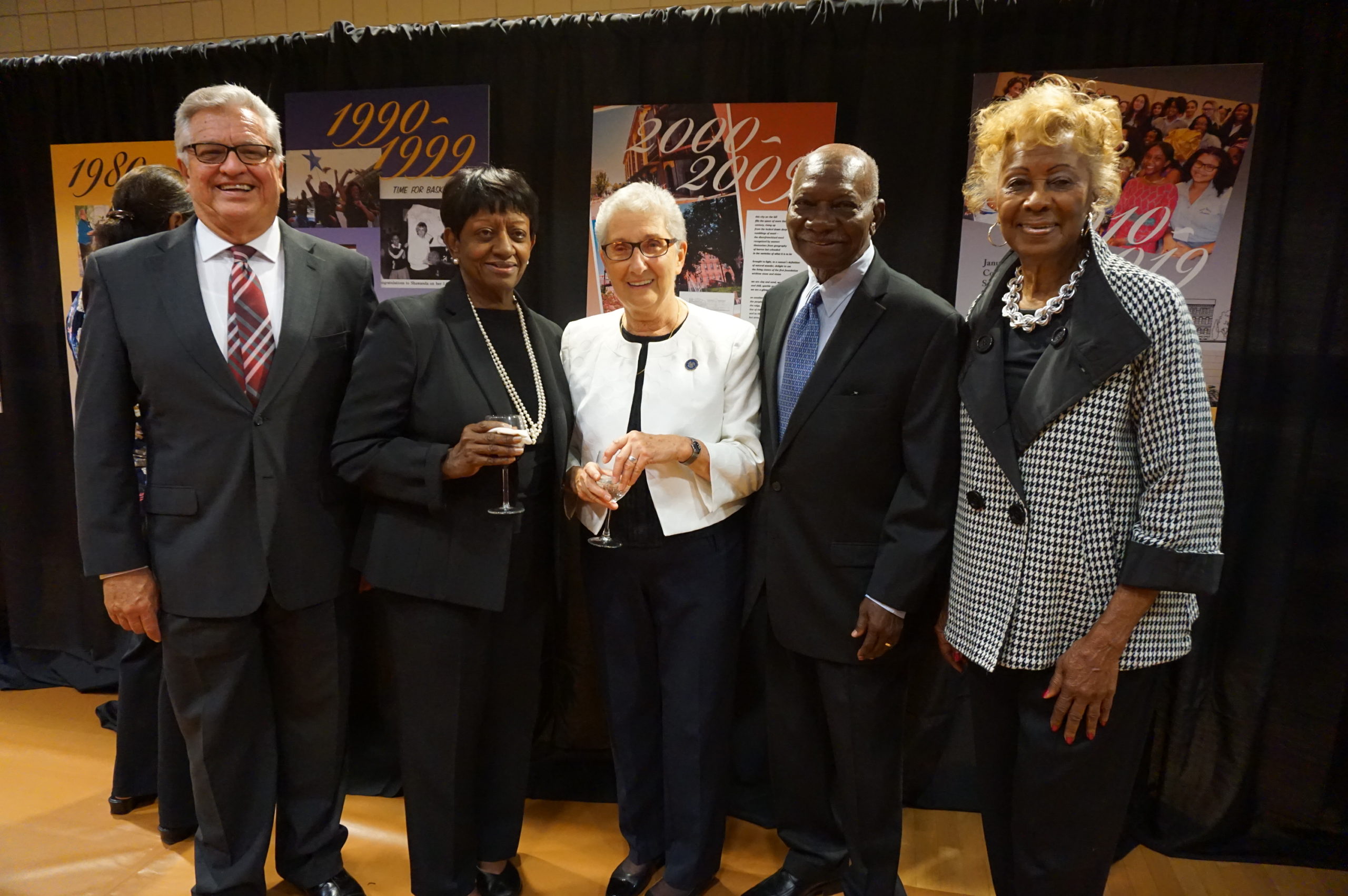 While Saint Vincent Academy is an all girls Catholic high school and New Community is a community development corporation that provides a myriad of services to members of the community, their goals are similar.

“With Saint Vincent Academy’s commitment to empowering individuals, their mission clearly intersects with the mission of NCC. And in particular, not just individuals, but individuals within the urban areas,” said New Community Board President Dr. A. Zachary Yamba. “Monsignor’s passion in addition to everything else was for education and therefore I think NCC likewise is committed to that. NCC will also continue the legacy that Monsignor started by supporting some of the young women who go to Saint Vincent’s with scholarships.”

Saint Vincent Academy Administrative Director Sister June Favata came to Newark in 1969 and met NCC Founder Monsignor William J. Linder soon after. She explained that both the school and New Community had a vision of what Newark could be, though they took different approaches.

“I think that Father Linder’s vision was to provide the citizens with the skills and the opportunities that they need to live a life that’s worthy of their dignity as human beings,” she said. “We as educators thought there needs to be a total renewal in Newark and that can’t happen without educating citizenry. And so we approach it that way. We really do feel that if you educate a girl, you educate a society. When you educate a girl, you educate a family. And I don’t mean education just in terms of academic things. I’m talking about faith and values clarification and morals and developing in people a moral compass. All those things that contribute to good citizenship.”

Education has always been an important component of New Community as well. NCC has two early learning centers, it opened a charter school and it helps send high school students to Catholic high schools through the Monsignor William J. Linder Scholarship Fund.

“Saint Vincent Academy and New Community have been working together to support our youth for a long time. Saint Vincent’s has been a part of the Newark fabric for 150 years. We are the new kids on the block at 50 years,” said NCC CEO Richard Rohrman. “Sister June and Monsignor Linder worked tirelessly to see that promising young people got the chance to excel in their lives. One individual’s success will over time change the course of the lives of their children, grandchildren and so on. The multiplier effect of one success is so powerful. Monsignor Linder was and Sister June continues to be two of the most effective and persistent champions of the city. We will continue to be as committed to Newark’s youth as ever.”

Sister June said between five and seven Saint Vincent Academy students per year usually receive assistance from the Monsignor William J. Linder Scholarship Fund. But the partnership between SVA and NCC goes much deeper than that.

SVA has a program called Students-in-Community, which every student participates in annually.

“The idea is to have the students become imbued with a sense of responsibility to other people,” explained Sister June. “That idea of doing to your neighbor what they would do to you. That idea of serving others as Christ served.”

The school frequently sends students to work at Harmony House, NCC’s transitional housing facility for homeless families, and Extended Care, its nursing home, as part of the program. Last year, students hosted a luncheon for senior citizens as part of the Students-in-Community program and invited NCC residents to attend.

SVA also gave Monsignor Linder its Pelican Award in 2014 to honor him and the work he accomplished.

She also said she was impressed with how he accomplished his goals.

“Lots of people can have the vision but not too many people can bring that vision to reality. And he had the ability to do that,” she said.

“While we did very much appreciate everything that NCC was doing under his leadership, we were so desperately trying to keep this place going. It was more his initiative and his generosity and his understanding and appreciation for what we were doing that created the partnership,” she said.

Going forward, Sister June hopes Saint Vincent Academy can incorporate New Community even more into the curriculum, perhaps having NCC employees visit the school and tell the students about their work, how they accomplish it and what it means to them.

“I think that their imaginations could be captured by meeting people who are offering their skills and talents and time and energy to building up the kingdom in Newark,” she said.

EMPLOYEES RECOGNIZED ON THEIR SPECIAL DAY