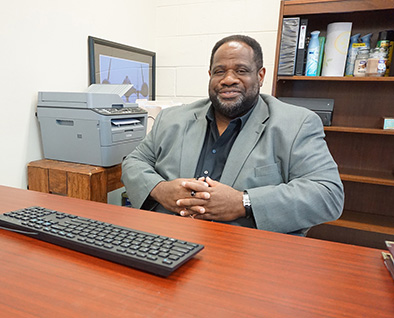 New Community has a new Security Operations Manager to oversee unarmed security personnel throughout the network. John Wade has 30 years of experience under his belt, spending time in the military and civilian law enforcement.
Wade spent six years in the Air Force, mostly overseas in Europe and Central America. He served as a weapons instructor and security specialist. After leaving the military, Wade spent more than 20 years with the Orange Police Department, rising through the ranks to lieutenant before retiring. He was asked to come back after retirement and served as the deputy emergency management coordinator and the police director.
He is very familiar with New Community. He was born and raised in Newark, graduated from Science Park High School and had family members and friends who lived in NCC’s housing.
“John will be a terrific addition to NCC. He has an extensive background in law enforcement in Essex County and is familiar with Newark and the people in law enforcement here. His background in training and administration brings a high level of organizational skills to us,” said New Community CEO Richard Rohrman. “I am happy to have him and look forward to working with John to further the NCC mission.”
Wade, who started in his role Sept. 18, said he wholeheartedly accepted the position when it was offered.
“My career has centered around different positions to make an impact. That’s what I want to do here, internally and externally,” he said.
As part of overseeing the 90-plus unarmed security members, Wade will be revamping the training programs. He serves as a police instructor part-time at the Essex County College Police Academy and plans to convert the instruction for the security officers and supervisors, increasing their knowledge and improving the image of the Security Department and New Community as a whole.
Wade enjoys teaching, which he has been doing for more than three years.
“I impart some knowledge that helped me survive the scrutiny of my position or spared my life in different situations,” he said.
Wade is also currently a student. He’s working toward a master’s degree in public administration at Fairleigh Dickinson University. He may also pursue a master’s degree in homeland security in the future.
Wade lives in Essex County and has two sons. Currently most of his free time is spent working toward his master’s degree.
“I’m committed to doing it,” he said.
Tags: Air Force, Central America, Essex County, Essex County College Police Academy, Europe, Fairleigh Dickinson University, John Wade, NCC, New Community, Newark, Orange Police Department, Richard Rohrman, Science Park High School, Security, Security Department, Security Operations Manager