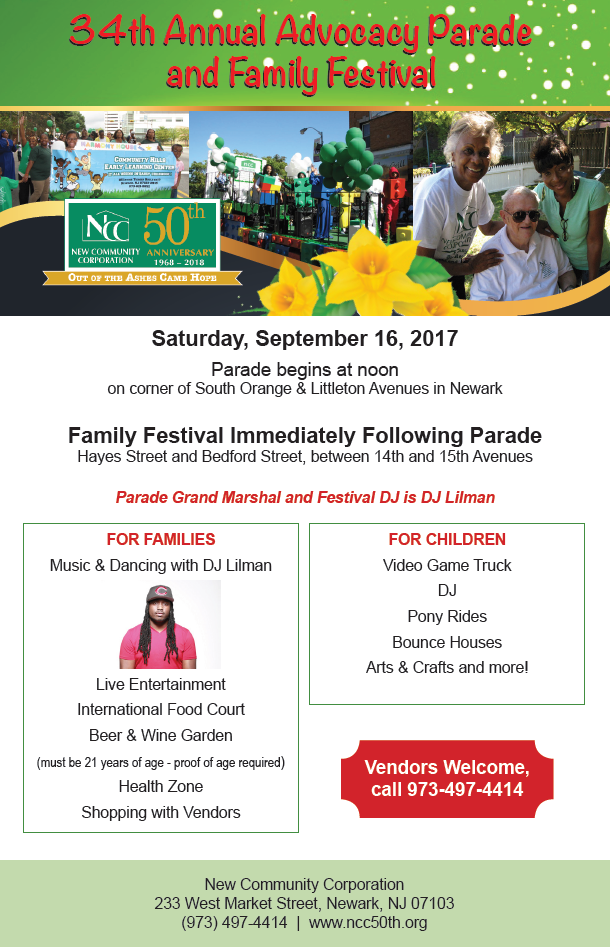 New Community Corporation is hosting its 34th Annual Advocacy Parade and Family Festival Saturday, Sept. 16. The parade will begin at noon at the corner of South Orange and Littleton avenues in Newark, immediately followed by the festival next to Commons Senior, 140 South Orange Ave.
The theme of this year’s parade is “The Faces of New Community.” There will be five floats representing various parts of NCC in addition to those marching.
This year’s parade grand marshals are New Community Outreach Coordinator Madge Wilson and Kevin Brown, better known as DJ Lilman.
DJ Lilman will also serve as the Family Festival DJ. The 30-year-old was born and raised in Newark and has been performing as a DJ since 2002.
In addition to the live entertainment, the Family Festival will include an international food court, a beer and wine garden (for ages 21 and older with proper ID), a Health Zone and an area for children. Kids will enjoy a video game truck, pony rides, bounce houses, arts and crafts and more. The festival ends at 5 p.m.
The parade and festival will highlight the impact New Community has had in major areas of community development, including affordable housing, child care, job training and health care.