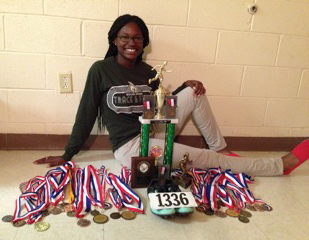 Infinity Hedrington, 16, moved into Harmony House with her parents in April and is pursuing her dream of running track in college.

She may be a sprinter on the track, but Infinity Hedrington is learning to chase her dreams with patience, despite life’s obstacles.

A rising junior at West Side High School in Newark, Hedrington has snagged more than two dozen medals and awards in just the first half of her high school track career. She made her debut, as a freshman, at the storied Penn Relays, the oldest and largest track and field competition in the nation.

In April, 16-year-old Hedrington and her parents, Michelle and Rudolph Jr., moved into New Community’s Harmony House, a transitional housing facility for homeless families. They had been temporarily living with Michelle’s mother at her home on Sixth Street but were forced to move when the space became too cramped. Rudolph Jr. lost his job with Home Depot in Vauxhall in July of 2013 and since then, he and his wife say they have struggled to find jobs.

Despite her family facing tough times, Hedrington has not allowed “seasons of difficulty in life define who she is,” said head track coach at West Side High, NaDeen Richardson, who also mentors the teen. Hedrington became captain of the girls varsity track and field team this season, which concluded in May.

Hedrington has high hopes for her track career beyond high school. Her goal is to earn a full ride track scholarship to a Division 1 college. She even dreams of competing in the Olympics one day.

But for now, Hedrington’s top priority is earning high marks on her report card.

“I have to do good in school because I don’t want to lose track,” she said. So far, the teen has managed to stay competitive in both arenas of academics and athletics. She earned a spot on the high school’s “Super Honor Roll” in December of 2013 and her report card, which her mother keeps a copy of on her cell phone, boasts mainly As and a few Bs.

Born in Newark, Hedrington grew up in Virginia and after more than a decade, she and her parents returned to the Brick City in 2012. Hedrington, the youngest of five siblings, signed up to run her first race—a 10-mile Shamrock Run in Virginia Beach—with members of her fourth grade class.

“I was fast and people said I should keep going,” Hedrington recalled of people’s reactions after she finished the race.

Hedrington’s signature race is the 200 meter dash, which is “all in your mind,” she said. At the sound of the starting gun, she leaps off the line and says she focuses on her technique, not on her opponents.

Knees up, chin down, get off the turn fast, Hedrington silently repeats.

Before each race, Hedrington says she recites the Scripture verse that her father repeats to her every morning. “I can do all things through Christ who strengthens me,” she says, quoting Philippians 4:13.