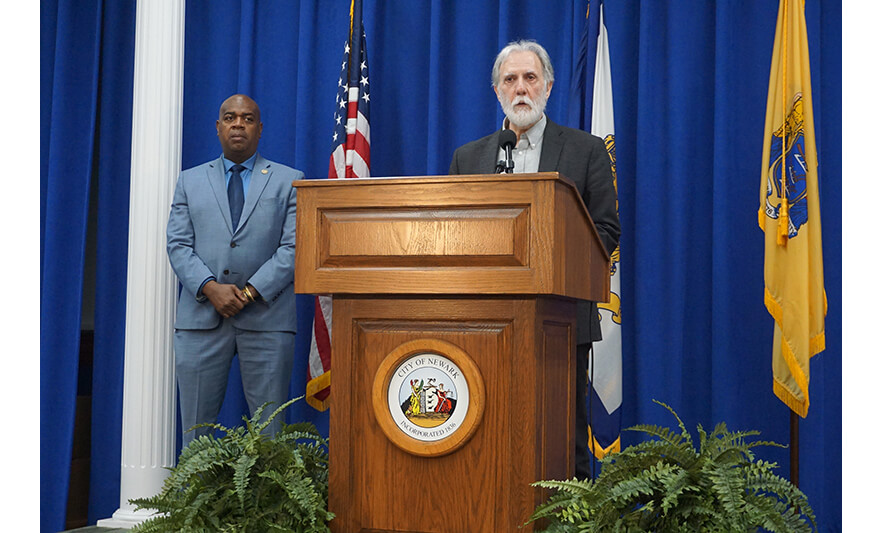 New Community Director of Community Engagement Richard Cammarieri speaks at a press conference at Newark City Hall on May 4 about the harm that can come from corporations purchasing homes and converting them to rentals in the city. Mayor Ras Baraka looks on.

New Community Director of Community Engagement Richard Cammarieri spoke at Newark Mayor Ras Baraka’s press conference on May 4 regarding the issue of corporations purchasing homes in the city and converting them into rentals. The press conference was in response to “Who Owns Newark,” a research report authored by David D. Troutt, Director of the Rutgers Center on Law, Inequality and Metropolitan Equity (CLiME). The report found that almost half of all real estate sales in Newark were made by institutional buyers.

While legal, the ramifications of bulk corporate ownership are farreaching in the city, according to officials. Rents rise, homeownership decreases, affordable housing is less available and renters are displaced, all of which lead to less stable communities.

“Just because something’s legal doesn’t make it right. This acquisition, as the report points out, leads to a great deal of harm in our neighborhoods, particularly racially inequitable harms in terms of rents rising, displacing the residents, evictions and lowered opportunity for homeownership,” explained Cammarieri, who is also Chair of the Newark Community Development Network and a member of the Equitable Growth Advisory Commission. “These are all things that are harmful and thus they should be considered wrong, no matter how ‘legal’ they might be.”

In an effort to combat the effects of these purchases, Baraka outlined proposed policies, including making it unlawful to solicit offers without the residents’ permission, making sure LLCs provide contact information when purchasing properties, imposing fees on property owners and landlords who increase rents more than 5 percent year over year, adding a deed restriction to all city-owned and Land Bank properties to require them to be affordable and meeting with investors, developers of color and community development corporations to develop strategies to invest in under-invested and disinvested communities in Newark.

“In cities and even suburbs across America, institutional investors are eroding the American dream of homeownership as they convert owner-occupied homes into corporately owned rental units,” Baraka said. “In Newark, where we have worked hard for years to expand homeownership, we will do everything possible to combat this dangerous trend. The CLiME report signals that Newark must create stronger and more equitable laws, regulations and policies to ensure that residents share in the growth of our city.”

Deborah Smith Gregory is Vice Chair of the Equitable Growth Advisory Commission and is a homeowner in Newark’s South Ward. She said she has received phone calls about selling her home to investors and has seen many signs in her neighborhood advertising cash for homes. She also said she was unable to figure out the owner of a vacant home in her neighborhood that she was interested in purchasing for a family member.

While Smith Gregory said the actions of the investors aren’t illegal, she called them highly unethical.

“It is not a good feeling to feel like we’re prey,” she said.

Baraka said he would submit legislation to the municipal council for members to take action to combat the effects of corporate ownership and conversion to rentals.

Residents At Orange Senior Get Tips On Fire Prevention, Safety