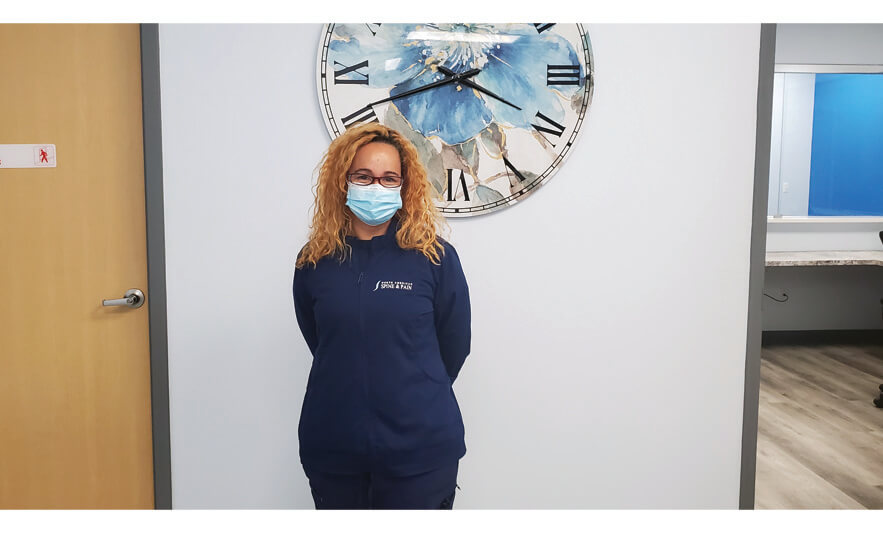 Eddy Oviedo remembers the day she noticed NCCTI on her way to work. “There was a sign that said something about the CMA program being for free, so I called, and that’s how I got in,” said Oviedo. She mentioned that NCCTI offered the same exact course that she was taking before at a university. Eddy’s story is really telling. Eddy is a single mom of five kids who joined the CMA program looking for a steady career. She had no prior professional experience in the medical field, however, Oviedo was determined to establish a career path for herself and her family.

“She was such an excellent student, great attendance, fast learner, gave of herself to help her classmates, and always came to school with a smile,” said NCCTI Director Rodney Brutton.

In the beginning of her journey to achieving one of the most important goals of her life, Eddy said, “It was really hard. I was working a lot, sometimes working nights and then having to come to class in the morning. I would go from doing school stuff with the kids, then to class and then come home to study,” she said. “No matter what I always had to be a mom, and that was hard but I knew I couldn’t give up.”

While completing the program, Eddy had a number of challenges, both personal and financial, but she persevered.

After attaining her national certification she aggressively began looking for opportunities, NCCTI staff assisted with updating her resume and off she went. She was able to secure a wonderful job with NASP through her own efforts and determination. There she works as a Medical Assistant.

Now that her children are all in school, Eddy is preparing to start nursing school beginning with online courses.

Eddy’s work has led to a long term partnership with NASP and Rehabilitation Center, in such a way, they are now looking to recruit graduates directly from NCCTI. “This partnership is all thanks to Eddy doing a wonderful job representing herself and the institution in a professional manner,” said Brutton.

Now financially stable, Eddy is saving to buy a home to share with her family. She is also working with our financial coach, Tamara Brown, to help meet her homeownership goal. Eddy also spoke about one of her best moments at NCCTI that made her want to keep going: “During phlebotomy class, I was the only student allowed to draw blood from Dr. Seham,” she said.

Eddy’s story speaks to how NCCTI provides opportunities for graduates to start careers, and not simply jobs. Long-term success, retention services and continued professional growth are key components to our work and Eddy epitomizes the school’s efforts in this area. To any current student or anyone aspiring to achieve success in any NCCTI program Eddy shared “stick with it.” She went on to say, “I’ve always had it hard, even when I had my first son, I went from nothing to having a good job, then I lost it.”

Eddy always worked hard because she knew her children looked up to her, and she never wanted to let them down. “At one point, I went from just having little jobs here and there,” she said. “I had a job working at Chipotle, making $10 an hour.” She stressed how important her consistency was to her now success. “When I first met Rodney, I was pretty much broke, but in the last three years I was able to save $20,000, and I only graduated two years ago.”

“When I passed that test, and they were helping me with my resume, I already had letters of recommendation from personal doctors, my own personal doctor,” she said. “They saw me working hard.” She also added, “I couldn’t wait around for something just to happen, I had to make something happen for myself and my babies.”

Her Supervisor and Regional Director of North American Spine & Pain, Brian Fornataro, also had nothing but great things to say about her.

“Eddie is very determined to get the job done, she is proactive in seeing issues and fixing them,” he said. “She is always willing to give a helping hand and be a mentor to new additions to the team.”

Fornataro also spoke about the future partnership with NCCTI, working on building the community in Newark, establishing internship opportunities, as well as being a guest speaker at NCCTI. We look forward to joining forces with NASP and enhancing the Newark community.