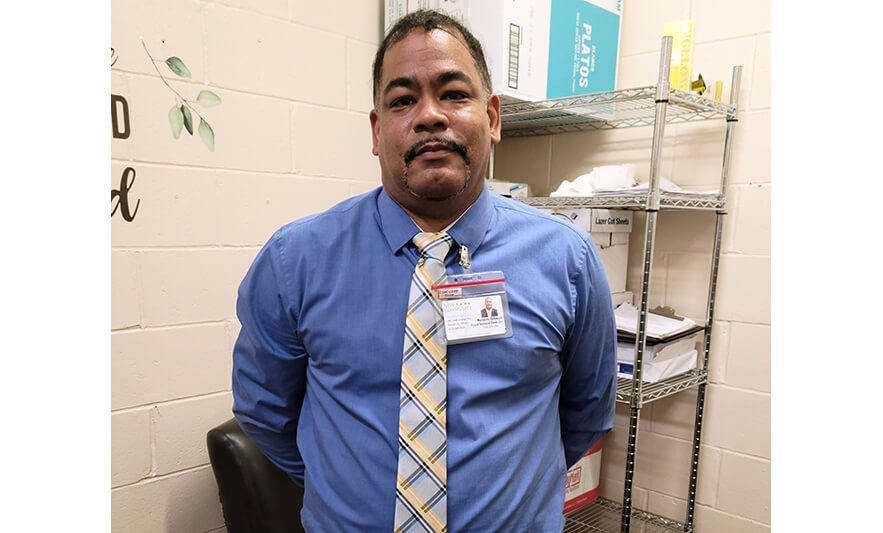 New Community has a new Food Service Director stationed at Extended Care Facility. Nelson Gibson joined New Community on June 7 and has jumped right into the role. He comes with an extensive background in food service and hopes to make a positive difference in the lives of Extended Care residents.

“Nelson Gibson has worked in the nursing facility food service area for over 15 years and we are pleased with his addition to our Food Service Department at Extended Care,” said New Community Chief Operating Officer Fred Hunter.

Extended Care Administrator Veronica Onwunaka is also happy with the decision to bring Gibson on board.

“He is making such a great impact with his professionalism and his commitment to what we are doing. He is showing that he is a doer, not an observer,” she said.

One of the first projects Gibson is taking on is building a new four-week cycle menu for Extended Care residents. The menu will include three well-balanced meals per day that fit into guidelines for different therapeutic diets. He plans to take residents’ input into account and make adjustments accordingly.

“Sometimes in a setting like this, the only thing you have choices over is what you eat for the day. And if I can make that pleasurable and enjoyable for the residents here, then I feel like I’ve done my life’s work, so to speak, and what I came here for,” Gibson said.

In addition to crafting the menu for residents, Gibson is also in charge of managing staff and ordering for Extended Care, NCC’s early learning centers and summer programs and the New Community Career & Technical Institute Culinary Arts Specialist program.

Gibson became involved in food service after high school. He was living in Piscataway and enrolled in a culinary program at Middlesex County College, which he enjoyed. He continued his education at New York Restaurant School, where he earned his culinary degree. From there, he worked in corporate dining for 16 years as the executive chef to the CEO of AT&T in Bedminster.

He didn’t feel fully fulfilled so he took the advice of a friend who was a dietician and accepted a position as a supervisor at a nursing home in East Orange.

“It kind of filled that void because you got to see what you were doing and how it made a difference for people,” Gibson said. “I was raised by my grandparents. Every resident reminded me of my grandparents and I wanted them to be treated with respect and dignity.”

Gibson was laid off due to the COVID-19 pandemic after serving as the Food Service Director at St. Joseph’s Healthcare and Rehab Center for 17 years. In his job search, he said he was looking for a long-term opportunity where he could make a difference in people’s lives.

“I’m not the kind of person that jumps from job to job,” Gibson said. “I want to be in a place where I can make a difference and see the difference that I’m making.”

Gibson lives in East Orange with his wife of three years. He has four sons ranging in age from 19 to 30. In his spare time, he enjoys camping, bowling and motorcycle riding.

He looks forward to growing his career at New Community.

“I’m enjoying my time here so far,” he said.

To Infinity And Beyond: Next Stop, Virginia State University

How Are We Doing? Results Of Client Satisfaction Survey