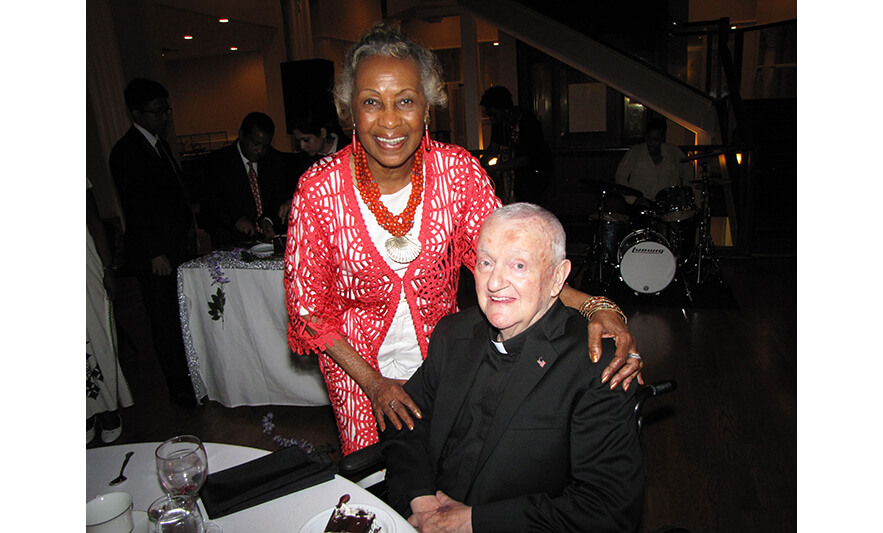 Madge Wilson has been employed at New Community for more than 41 years. Here she is with the late Monsignor William J. Linder, founder of New Community, at his 80th birthday celebration.

It’s extremely rare to find an individual who has dedicated more than four decades of their career to one organization. But anyone familiar with New Community knows Madge Wilson who has been a constant at the organization for more than 41 years.

Wilson met the late Monsignor William J. Linder, founder of New Community, at Queen of Angels parish in 1962 where he was first assigned after graduating from the seminary and becoming an ordained priest. After he and other community members started New Community in 1968, Wilson became involved. She was one of the founding members of Babyland Nursery, which provided childcare services, in 1969. After New Community constructed housing, Wilson officially joined NCC as an employee in 1980, becoming a member of the Property Management Department as a manager for family and senior housing. She previously worked for the Newark Housing Authority from 1964 to 1980 so she had experience in that area.

Over the last four decades, Wilson has helped people in more ways than just through her official job responsibilities. While working in the Property Management Department, she began the annual Christmas drive, which she still does today. She arranges for the collection of holiday gifts for children from a variety of sources, including Catholic schools, churches and individual donors, and distributes them to families in need connected to New Community and Saint Rose of Lima Church, where she has been a member since 1974, when Monsignor Linder began serving as pastor there. She also distributes donated turkeys to families in need for Thanksgiving to ensure they have a festive holiday meal.

Wilson works with the National Council of Jewish Women Essex County (NCJW/Essex) to ensure New Community and Saint Rose of Lima families are able to participate in the organization’s annual Back 2 School Store, which takes place each summer. It provides school supplies, shoes, clothing, winter coats and toiletries to county residents in need who are identified by area organizations.

In addition to the annual events, Wilson also helps New Community residents furnish their apartments if necessary. She will arrange for pick up and drop off of donated furniture to make the units truly feel like home.

Since becoming an NCC employee, she has worked to help secure housing for military veterans, many who have been on the brink of homelessness. She has worked with members of the Veterans Administration Hospital in East Orange and Lyons to ensure veterans have a safe place to go upon discharge.

Wilson said she came to New Community to work for the people who needed it most and that goal hasn’t changed.

“There were so many poor people and that’s who I try to help, poor people that need help,” she said. “I said when I came to work for New Community that I would never leave and that I just wanted to be able to help people. To make a difference in their lives. And I’ve done that.”

Now Wilson serves as New Community’s Outreach Coordinator and is a long-time member of the organization’s Board of Directors. At 88 years old, she has no plans to retire.

“I’m staying busy and that’s what keeps me going,” she said. “My satisfaction is helping people. That’s my mission.”

Her hard work and dedication are well-known to New Community residents, staff members and fellow board members.

“Madge Wilson is one of those rare individuals. She’s an embodiment of what NCC stands for, which is service and commitment to the community from the young to the elderly,” said New Community Board Chairman Dr. A. Zachary Yamba. “But more importantly, she does it with such grace and joy that it’s really a testament to her deep and abiding faith in people.”

Wilson has had her own set of personal trials, including health challenges, but she has never let anything stop her from serving others.

“After Monsignor Linder, there is no one who encapsulates the NCC mission more than Madge. She has worked tirelessly for the people of Newark every day for over 41 years. Madge works one-on-one with people and it is incredible to think of the sheer number of people Madge has impacted over this long life of service to others. From children to seniors she has been there for everyone,” said New Community CEO Richard Rohrman. “Madge was also dedicated to helping Monsignor Linder through his health issues and went to the Extended Care Facility every night after work until late to be with him so that he always had company. She is the definition of kindness. You could not ask for a better person to be on your side than Madge. I have been lucky to have known and been inspired by my friend for 40 of these years.”

Wilson has been recognized on numerous occasions for her work by other organizations as well. She was honored as an Essex County Legend by the Essex County Division of Senior Services in 2010, received a letter of recognition from President Barack Obama in 2011, was named Volunteer of the Year for her efforts on behalf of long-term care residents by the Health Care Association of New Jersey in 2016 and received the Saint Vincent Academy Woman of Distinction Award in 2017.

While she is grateful for the accolades, Wilson said she doesn’t expect or need recognition. She simply wants to do the work that needs to be done to fulfill New Community’s mission: to help residents of inner cities improve the quality of their lives to reflect individual God-given dignity and personal achievement.

“The love that I have for New Community is unspeakable,” she said. “This is my home.”