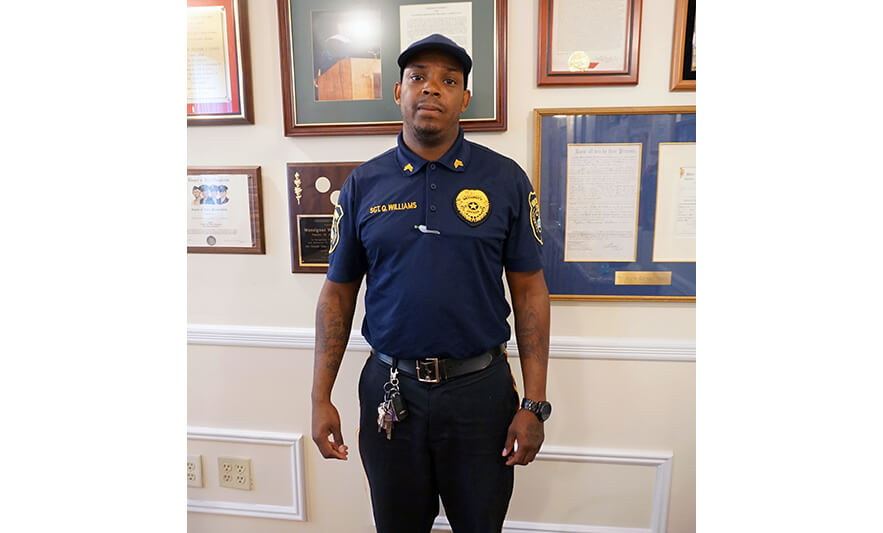 Quawee Williams grew up in New Community housing and became a member of NCC’s Security team. In 2019, he left NCC to become a Newark Police Officer. He has since returned as an NCC Task Force Officer on the days he isn’t working for the city.

Quawee Williams has a long history with New Community. He grew up in NCC housing, worked for the organization’s Security Department for seven years and has returned as a Task Force Officer after achieving a career in law enforcement with the Newark Police Department.

Williams joined NCC as a Security Officer in 2012 and was promoted to Supervisor. In his seven years with the department, he worked every shift and at every site. He resigned from his role with NCC Security in September 2019 to become a Newark Police Officer. While he was excited for the opportunity and his next chapter, he was sad to leave New Community.

“I loved it here. I loved the people, the community,” he said. “New Community was a great stepping stone for me. The transition, the training, the people I’ve interacted with, everything prepared me for the next level.”

Williams entered the Police Academy in September 2019 and officially became a Newark Police Officer on Feb. 3, 2020.

He decided to return to New Community as a Task Force Officer to serve as a role model, showing others that they can achieve their career goals.

“I just want to change the mind for some of the kids that feel as though they don’t know where they want to go in life or what they can do in life,” he said.

NCC Security Operations Manager John Wade encouraged Williams to pursue becoming a police officer and helped him prepare for the transition. He is happy to have Williams back at NCC.

“Quawee Williams was one of my dependable supervisors when he worked on the Security side of the house,” Wade said. “As a former law enforcement executive, coaching him in joining the ranks of the Newark Police Department was my pleasure. Welcoming him back, as a Task Force Officer and a product of NCC, was a no brainer.”

Williams returned as a Task Force Officer in November. He works overnight shifts for NCC when he’s not working as a Newark Police Officer. He mainly responds to emergency calls.

“I’m happy that I can work for others and just be someone that can lend a helping hand in any situation and be a listening ear for those that need it,” he said.

Williams still lives in the area and has a young daughter.

He is grateful he had the opportunity to grow with New Community, launch a law enforcement career and return to serve the organization and its residents once again.