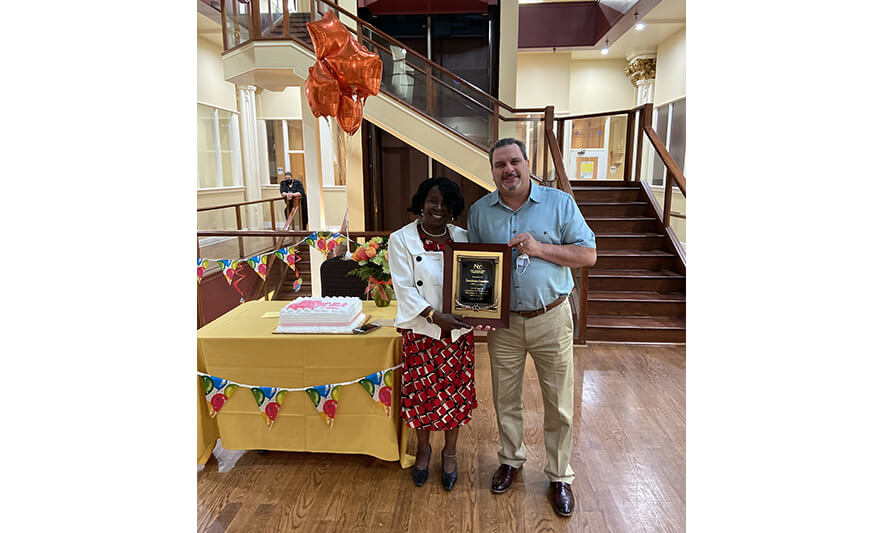 Muobo E Enaohwo, who spent 30 years working in the Property Management Department of New Community Corporation, retired Aug. 31. She spent time at each of NCC’s properties over the course of her career and trained many of the property managers before they started working in their assigned buildings.

Enaohwo enjoyed her time at NCC.

“New Community is part of my family,” she said. “I liked my job. I liked my tenants. I liked what I was doing.”

NCC CEO Richard Rohrman has known Enaohwo for her entire tenure with the organization.

“Muobo is the best of NCC,” he said. “I have known Muobo for the 30 years that she has worked so hard to provide housing and services to our residents. Her first position was in the management department as an administrative assistant. Then came assistant manager, manager, senior manager and a stint as assistant director. Muobo was always there through the ups and downs over the years. Dependable, hard-working and she had a firm grasp on the NCC mission. Thank you Muobo and enjoy the relaxation that you have earned many times over.”

She served as the administrative assistant under three directors of Property Management before being promoted to assistant property manager, property manager and senior property manager. In 2006, she was placed at Commons Senior to oversee that building and the Commons Family units. At the time, there were a lot of vacancies, issues with individuals living in units without being on the lease and back rent due. Enaohwo was tasked with resolving the issues and remained in that role for 10 years.

In 2016, Enaohwo became the Assistant Director of Property Management, but she was asked to return to Commons in 2017 to resolve additional issues there. She spent the remainder of her NCC career at Commons Senior.

As a longtime member of the Property Management team, Enaohwo had a variety of responsibilities. In addition to collecting rent, she made sure recertifications were done on time to ensure tenants were able to keep their subsidies, she conducted interviews with potential tenants to fill vacancies, she did unit inspections to ensure apartments were kept in good condition and she oversaw staff members.

Enaohwo also embraced NCC’s mission of improving the lives of individuals. If she was meeting with a resident about recertification and found out the person needed assistance, she would inform the Resident Services Department to provide additional help.

“She often tried to assist residents in various ways with the intention to always provide them with something they didn’t have or share knowledge or ideas that they didn’t think about; to provide them a better outcome in some way,” said Director of Property Management Hector Torres. “I found Muobo to always be caring and genuine. Where she could help she would. If she couldn’t provide it, she found a source that could provide what the resident needed.”

After three decades with NCC, Enaohwo decided it was time to retire. She plans to move to Texas with her husband to be closer to family. She has three children (two sons and a daughter) and four grandchildren.