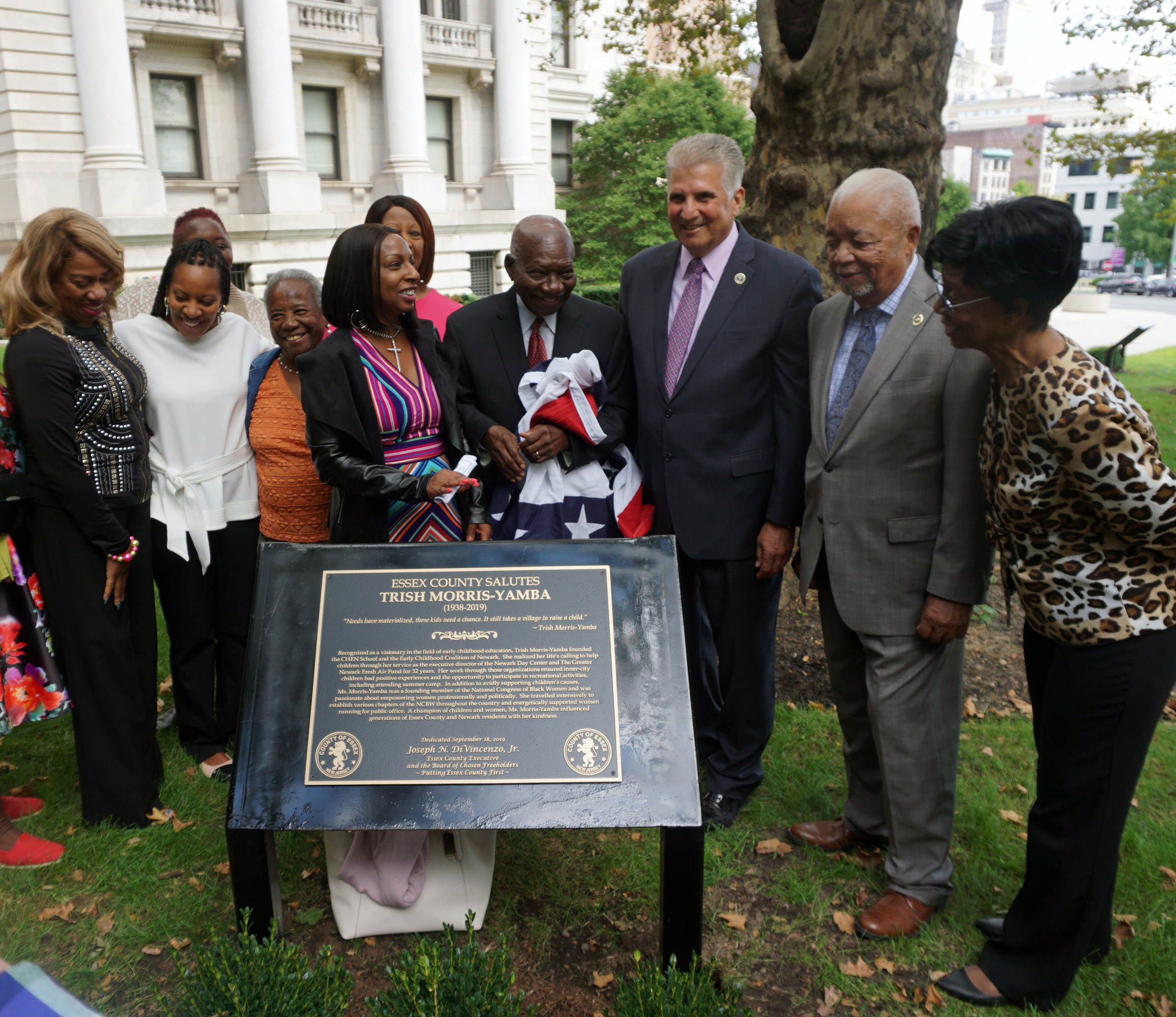 Essex County Executive Joseph DiVincenzo and the Board of Chosen Freeholders dedicated memorial plaques along Legends Way to five individuals who made great contributions to the county during their lives. Among those recognized were two with close ties to New Community: Trish Morris-Yamba, the late wife of NCC Board President Dr. A. Zachary Yamba, and Kenneth A. Gibson, a founding NCC board member and the first black mayor of Newark.

Elected officials, family members and friends gathered Sept. 18 at Governor Brendan Byrne Plaza in Newark for the ceremony and unveiling of the plaques along Legends Way.

“Collectively the work that they did was probably more than thousands of us put together,” Baraka said. “There would be no baton to take if they didn’t pass it to us.”

Morris-Yamba served as the executive director of the Newark Day Center and the Greater Newark Fresh Air Fund for 32 years. She made it possible for inner-city children to participate in outdoor recreational activities, including summer camp. She founded the CHEN School and the Early Childhood Coalition of Newark. She was also a founding member of the National Congress of Black Women.

NCC Board President Yamba spoke about how his late wife never wanted to run for office herself but was always very active behind the scenes to help women seeking election.

“She traveled the length and breadth of this nation to make sure that women who were running for office had the support of strong black women,” Yamba said.

He added that many miss Morris-Yamba but they take comfort in knowing she had an impact.

“We know that what she has done will far outlive her life on this earth,” he said.

“Anything I ever did, any office I ever ran for, the first contribution I would get was from Trish Morris-Yamba,” Oliver said. “Whether I was running on the line or off the line, Trish was always there for me.”

“She never, ever looked for praise whatsoever,” he said.

“Trish was just an exceptional person,” he said.

Gibson was one of the founding board members of New Community Corporation. He is best known for becoming the first black mayor of Newark in 1970.

“This was a watershed moment for Essex County and for the entire nation,” said Essex County Freeholder President Brendan Gill of his election.

Oliver said without Gibson’s achievement, she would not hold her current position.

“I would not be lieutenant governor without the opportunities provided to me by Kenneth Allen Gibson,” she said. “Ken Gibson won election when I was 17 years old. I cried like a baby because I understood the significance of what he had done.”

DiVincenzo said Gibson became the mayor of Newark at a difficult time, after the uprising in 1967 and civil unrest.

“Ken came in and made peace within the city,” DiVincenzo said.

Essex County Sheriff Armando Fontoura said Gibson was a close friend who he met while working at the Newark Police Department.

“He was just a terrific person to work with,” Fontoura said.

Gibson’s wife Camille thanked everyone in attendance on behalf of the family.

“Ken and I were joined at the hip and he was my hero,” she said. “We appreciate this very, very much.”

Essex County Democratic Committee Chairman LeRoy Jones said each memorial plaque represents a person who cared for others no matter their political beliefs.