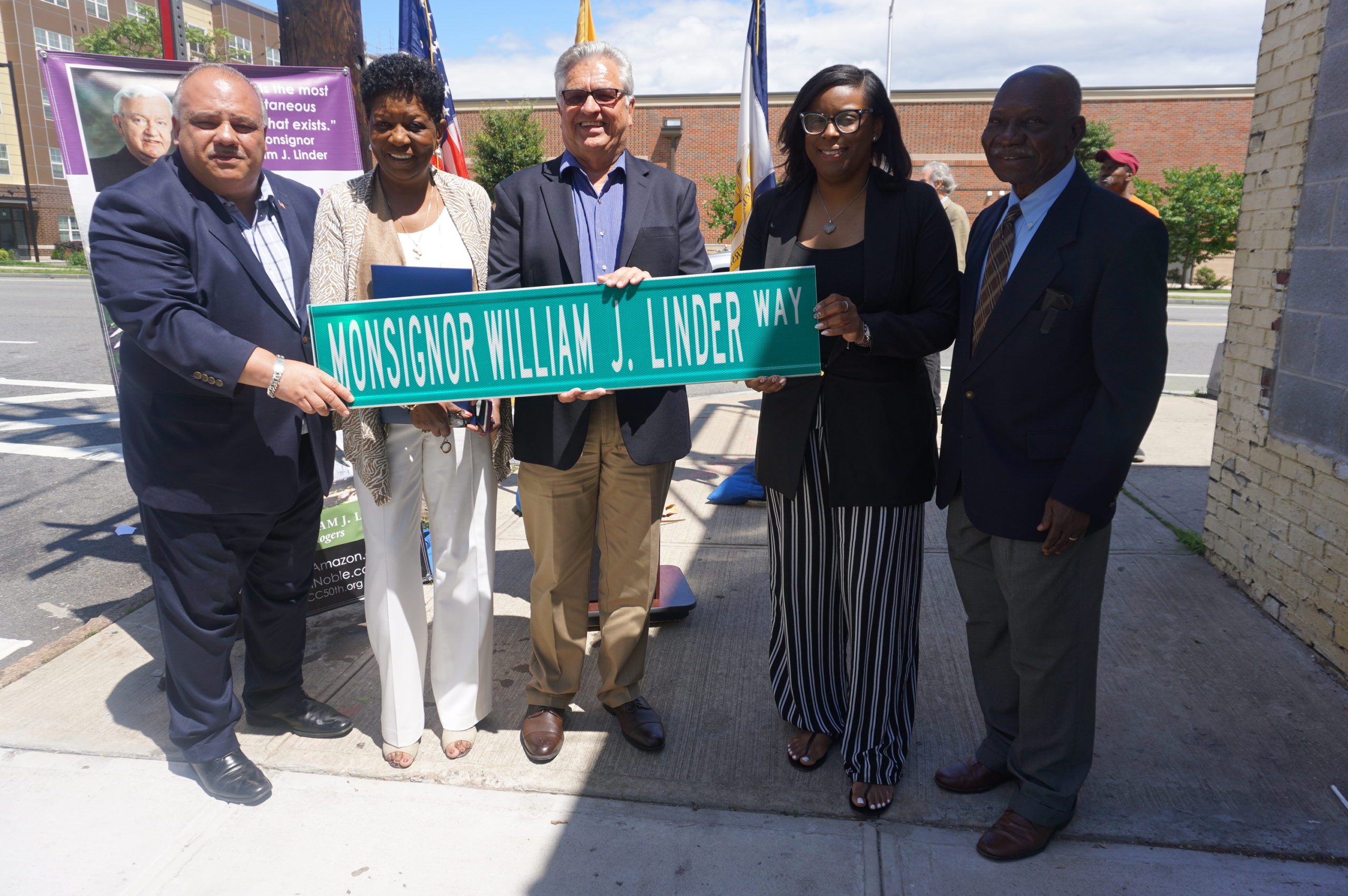 Newark officials and New Community employees gathered at 14th Avenue and Jones Street June 14 for an afternoon ceremony dedicating 14th Avenue to NCC Founder Monsignor William J. Linder, who passed away last June.
A new sign reads “Monsignor William J. Linder Way” to commemorate the work he did in the area and for the people in the community.
“The street dedication ceremony was such a fitting way to memorialize Monsignor Linder’s incredible contributions to the city and its residents,” said New Community CEO Richard Rohrman. “Fourteenth Avenue cuts through the very heart of NCC and this came at a time of a major renovation and investment in the housing which will keep his legacy intact for many years to come. Councilman Quintana sponsored the city council resolution and the council approved it. We are all appreciative of the council and administration’s support.”
Council Vice President and Councilman at Large Luis A. Quintana hosted the event. He called Monsignor Linder a visionary who deserves the recognition.
“He had vision for the city of Newark. Some people have come to Newark, made it in Newark and left Newark. Monsignor never left Newark,” Quintana said.
Central Ward Councilwoman LaMonica McIver said the dedication was fitting.
“It’s a pleasure for me to be here to honor someone who has been so legendary in our city, who has put so much work and effort into the city, especially the Central Ward because we are the home of the largest New Community developments,” she said. “I think it’s a good way to remember the work that he has done.”
New Community Board President Dr. A. Zachary Yamba said that while Monsignor Linder may not have wanted a street dedicated to him, it’s a special honor that highlights the legacy he left behind.
“Clearly when you look around the city of Newark, definitely the Central Ward, the footprint of Monsignor Linder is everywhere. So we are happy that Councilman Quintana has taken the leadership role in naming this corner in his honor,” Yamba said.
North Ward Councilman Anibal Ramos Jr. talked about all the services New Community provides to the residents of Newark, including affordable housing and job training.
“None of this would be possible if it wasn’t for a visionary leader. And that visionary leader was Monsignor Linder,” Ramos said. “So the city owes him a great deal of tribute.”
Newark Deputy Mayor of Employment Rahaman Muhammad called the work Monsignor Linder did, along with others, in creating and building New Community immeasurable.
Muhammad said Monsignor Linder “came here to make sure that those Newarkers who were going to reside in this ward benefited from the rebuilding of the city itself. We’re proud that this street is being named after Father Linder.”
Tags: 14th Avenue, Anibal Ramos Jr., Central Ward, Dr. A. Zachary Yamba, Fourteenth Avenue, Jones Street, LaMonica McIver, Luis A. Quintana, Monsignor William J. Linder, Monsignor William J. Linder Way, NCC, New Community, Newark, Rahaman Muhammad, Richard Rohrman