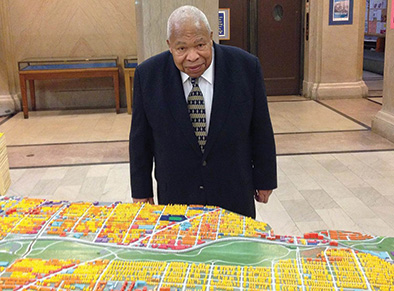 Ken Gibson was a founding board member for New Community Corporation, as well as Newark’s first black mayor. Photo courtesy of Tracey Battles.

Ken Gibson is best known for being the first black mayor of Newark, but he was also a founding board member of New Community Corporation. He passed away March 29 at the age of 86.
“Ken Gibson was a groundbreaker and was associated with New Community Corporation from its inception. He had a profound influence on the city and will be missed dearly,” said New Community CEO Richard Rohrman.
New Community Board President Dr. A. Zachary Yamba said Gibson was very dedicated to the city of Newark. Yamba said Gibson put a high priority on employment and training and was instrumental in the push to keep Essex County College in Newark when others were trying to move it to the suburbs. Yamba also called him a gentleman mayor.
“His personality was such that he always welcomed you. He didn’t push you off when you went to see him,” Yamba said. “I really admired him for that. I appreciated that relationship and certainly his passing is a great loss for all of us.”
Gibson spent the early part of his life in Alabama. He moved to the Central Ward of Newark with his parents when he was 8 years old. He attended Central High School and Newark College of Engineering (which is now NJIT). He was an engineering aide for the New Jersey State Highway Department, an engineer for the Newark Housing Authority and the treasurer of the United Essex Civic Association.
He first ran for mayor of Newark in 1966. He lost the race, but received a sizable amount of votes, which was encouraging enough for him to run again in 1970, when he won. Gibson served as mayor until 1986. He is the city’s longest-serving mayor.
In between his first two bids for office, the Newark Rebellion took place in the summer of 1967. After that, New Community Director of Community Engagement Richard Cammarieri said activists focused on two areas: electing a mayor and city council that reflected the makeup of the city and improving conditions so residents could thrive.
Cammarieri explained that Gibson was involved in both of those initiatives, with politics and as a founding board member for NCC, which was incorporated in 1968.
“In many ways Ken Gibson was at the intersection of these interrelated and complementary impulses: electoral political organizing and neighborhood-based community development,” Cammarieri said.
After Gibson became mayor and was no longer a board member for NCC, he still kept a strong relationship with the organization. Current New Community Board Member Newton Richards said Gibson was instrumental in helping NCC further its goals.
“He was really indispensable to us. He helped in our early progress. He expedited our interests in making up for the shortage in affordable housing. And getting the first supermarket, which was Pathmark, built. Because he had contact with the state and federal government,” Richards said. “He was a fantastic guy.”
Current Newark Mayor Ras Baraka praised Gibson for his service both to the city and the African-American community.
“He led in a tumultuous and difficult time as the city tried to recover from the Newark Rebellion. He will be remembered in his effort to live up to his words, ‘Wherever the country is going, Newark will get there first,’” Baraka said in a statement. “He set the stage for every African-American elected official in this state. We stand on his accomplishment and grow from his challenges.”
Before his passing in 2018, New Community Founder Monsignor William J. Linder wrote about Gibson and how he was tied to NCC long after he left the board.
“What New Community was accomplishing made Mayor Ken Gibson very proud, considering he was an original board member. More importantly, under his leadership, New Community had prospered and gained prominent recognition,” Monsignor Linder wrote. “Gibson and New Community were a winning combination.”
Tags: African-American community, Central High School, Central Ward, Dr. A. Zachary Yamba, Essex County College, Ken Gibson, Monsignor William J. Linder, NCC, New Community, New Community Corporation, New Jersey State Highway Department, Newark, Newark College of Engineering, Newark Housing Authority, Newark Rebellion, Newton Richards, NJIT, Ras Baraka, Richard Cammarieri, Richard Rohrman, United Essex Civic Association