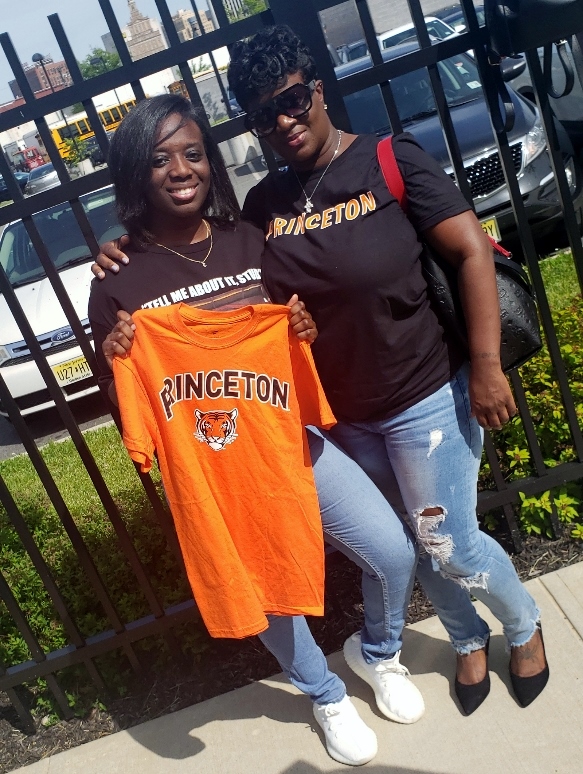 Community Hills Early Learning Center graduate Ci’Anee Campbell shows off her Princeton shirt with her mother Towanna Campbell. Ci’Anee will be attending Princeton University in the fall on a full scholarship. Photo courtesy of Ci’Anee Campbell.

The educational foundation children receive when they are young can help shape who they become. That is the case for Ci’Anee Campbell, who took pre-K classes at Community Hills Early Learning Center (CHELC) and will be attending Princeton University this fall on a full scholarship.

Campbell, who is now 18 years old, was in Carolyn Lowe’s pre-K class at CHELC when she was 3 years old. Campbell fondly remembers Lowe, who still teaches in the same classroom.

“When I was younger, I was not as expressive. And so being in Ms. Carolyn’s class, she was basically the only person I would speak to,” Campbell explained. “She was a very key part into the person I am today. Because she was always there to comfort you and make you feel comfortable.”

Lowe remembers Campbell as a little girl with a lovable and happy spirit who was a quick learner and very inquisitive and creative. While she wasn’t outgoing, Lowe said Campbell would speak up when she needed to and was observant and cared for her classmates, trying to console them if they got upset.

To further her education, Campbell applied to Princeton University through QuestBridge National College Match, which is a college and scholarship application process that helps low-income high school seniors gain admission and full four-year scholarships to the nation’s most selective colleges. The scholarships cover tuition and room and board for accepted students.

QuestBridge applicants rank their preferences of colleges, but must apply to each institution individually. They commit to attending the highest ranked preference they are accepted to.

“Princeton was my number one choice. I knew I wanted to go there so I didn’t apply to other schools,” Campbell said. “Princeton University is one of the universities that allocates the most to undergraduate research. I wanted to go to a university that would prioritize me as an undergraduate because I’m not sure if I’m going to go to grad school.”

“She was articulate as a 3-year-old. We could talk and we would talk all day,” Lowe said. “She was really sharp at 3 years old. And I would tell her mom that she was very observant. I’d just watch her sometimes, how she’d build in the block area. I thought this little girl is going to be a scientist one day.”

While Lowe had an impact on Campbell, Lowe said Campbell and her mother also affected her.

“The mom was very concerned about Ci’Anee. And it was really then I knew the importance of relating to the family at school,” Lowe said.

She explained that Campbell’s mother Towanna would ask about her daughter’s day, often waiting for Lowe to finish speaking with other parents or working with other children.

“We’re not only rendering services to the children, but it’s the whole family,” Lowe said. “That’s when I really got the big picture.”

Campbell has remained very involved in activities throughout her educational career. She was captain of her school’s STEM program where she competed against other high schools in scholastic competitions. She served as manager of her school’s basketball team. She was instrumental in bringing the AP Capstone program to her high school, which offers more challenging courses for students. She also works part-time.

Campbell is looking forward to continuing her education at Princeton in the fall and is excited for the future. Her preschool teacher is very proud of her former student and said it’s stories like Campbell’s that make her job worthwhile.

“Ci’Anee Campbell is certainly a testament to the example we as educators hope to witness,” Lowe said. “I am proud to know that I was able to share in the development of this young lady and the many other success stories that began in March 2001 right here at 85 Irvine Turner Boulevard, Newark, N.J.”