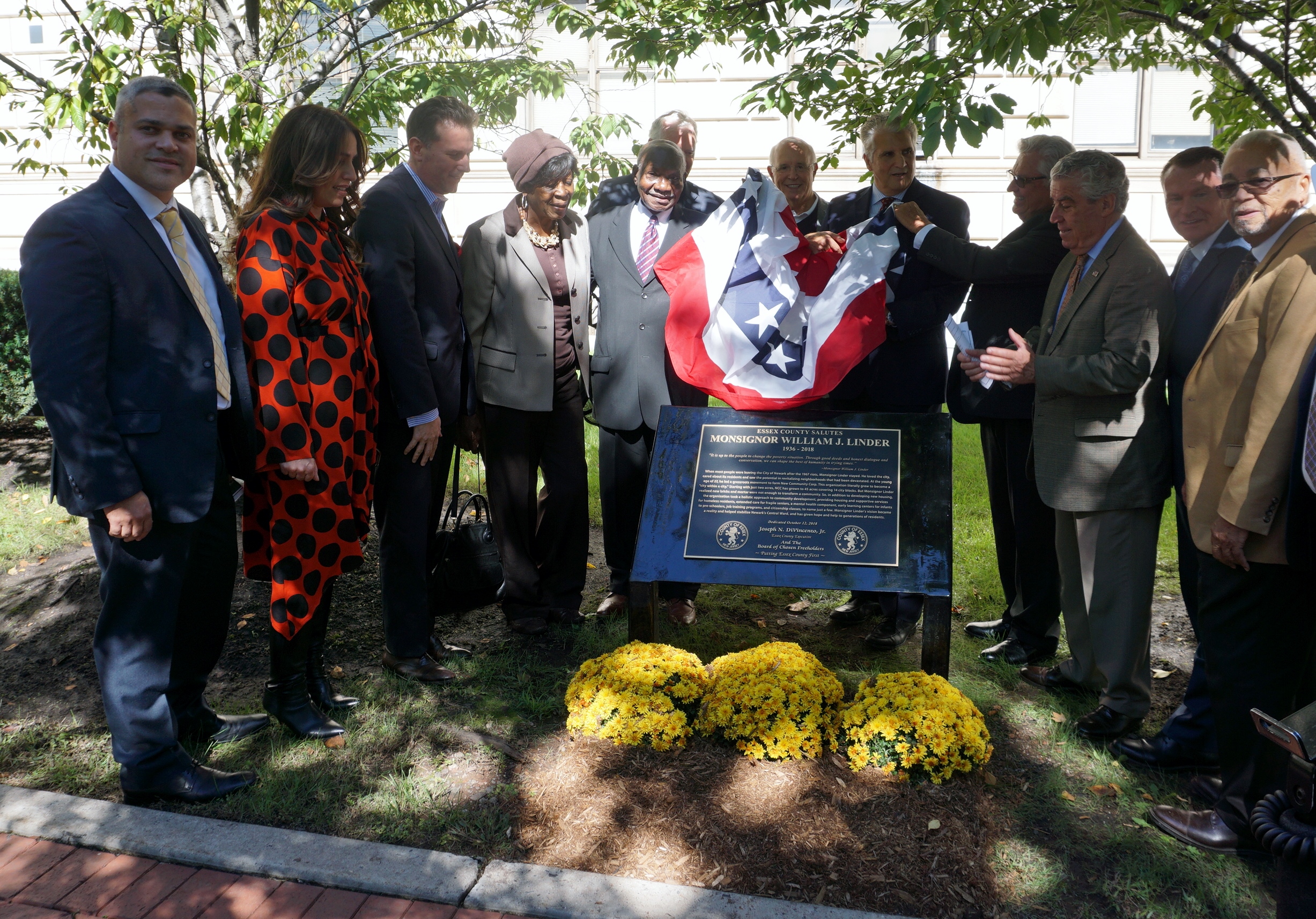 During the afternoon event, county officials and people connected to New Community spoke about Monsignor Linder, the depth of his work, the influence he had on Newark and how he was personally.

NCC Board President Dr. A. Zachary Yamba talked about how he met Monsignor Linder in 1963 when he was a student at Seton Hall University and Monsignor Linder was the pastor at Queen of Angels Church. Their friendship lasted for more than five decades and after Yamba retired from being president of Essex County College, he joined the NCC Board of Directors at Monsignor Linder’s request.

Yamba said while Monsignor Linder wasn’t a native Newarker, he did more for the city than anyone after the Summer Disorders of 1967.

“All you have to do is look outside the confines of county government and you can see the footprints of Monsignor Linder,” Yamba said. “We will be eternally grateful for this man who has worked so hard. And so the obligation that he has left us with is to carry on his legacy so that which he built will not have been done in vain.”

“He was a big dreamer but he also had a persistence and he had a determination to turn those dreams into reality,” Rohrman said. “He was really the most persistent and effective advocate for the people in the city of Newark.”

Essex County Sheriff Armando Fontoura talked about Monsignor Linder’s persistence, saying he could be relentless but it was for the right reasons.

“He never stopped articulating on behalf of the people that he served. That’s what was so admirable about him,” Fontoura said. “He was so passionate about serving the folks that needed to be served the most. … His legacy will live on forever.”

Former Director of Operations for New Community Raymond Codey shared several stories about Monsignor Linder and how he fought for the people of Newark from the very beginning of his assignment at Queen of Angels Church in the city. Three weeks after he became the church pastor, the Summer Disorders happened.

In an effort to control the situation, then Gov. Richard Hughes sent in the State Police and National Guard who set up a perimeter along the boundaries of Newark. This cut off the food supply for residents. Monsignor Linder convinced a bakery in East Orange to give him a truck and got permission from Gov. Hughes to drive that truck in and out of the city.

“He ordered milk, water, vegetables and bread and walked the projects right next to the parish. He did that for seven days. These were like 15-story buildings, no elevator service. He walked door to door, floor to floor, seven days delivering food,” Codey said. “And he built up a tremendous following in the community because of that.”

“Steve started the North Ward Center to say, ‘We’re going to be part of the community,’” DiVincenzo said. “Monsignor Linder did the same thing with New Community, dealing with the less fortunate. He was the man who spoke up.”

Though he said the two didn’t get along, he was able to bring them together to work out their differences.

“There’s only one Steve Adubato and one Monsignor Linder, but they were both doing the same thing: trying to help people in the city of Newark,” DiVincenzo said.

Sen. Teresa Ruiz called Monsignor Linder “a giant, a legacy builder who really created fundamental core principles of improving the quality of life for people either in a moment in time, for an extended moment in time or for their entire lifespan.”

“During a time of tremendous upheaval and despair, he became a favorite son of Newark by taking that despair and turning it into hope,” Gill said.

Those interested in viewing the plaque can walk along Legends Way near the Essex County Government Complex.