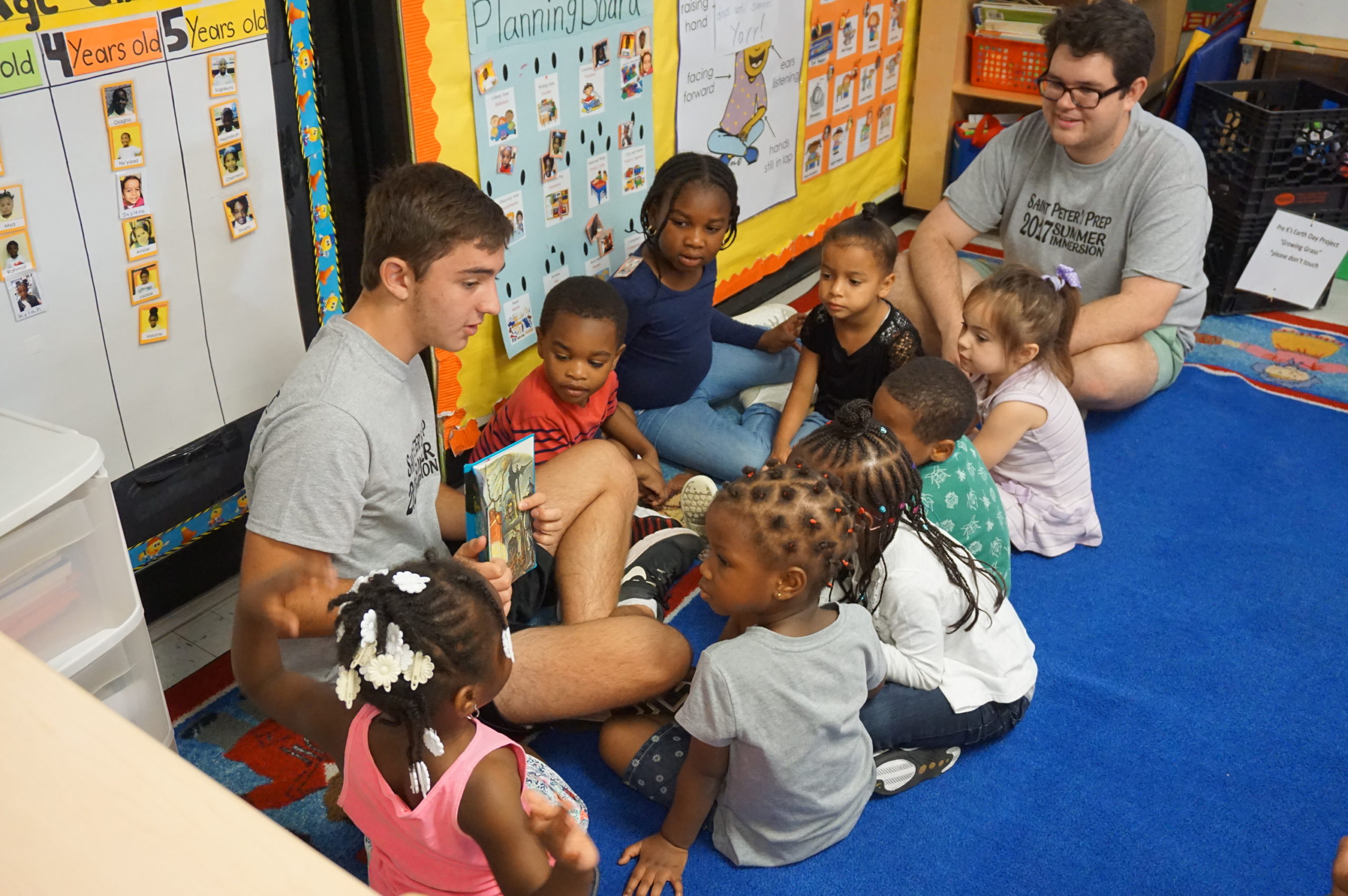 NEWARK – Ten rising juniors from Saint Peter’s Prep spent a week volunteering with New Community Corporation as part of the school’s annual immersion trip program.
The young men from the all-male prep school in Jersey City got firsthand experience of Newark, a city most of them knew little about.
The teenagers spent the week at different New Community locations, performing a variety of tasks. They cleaned units at Harmony House, New Community’s transitional housing facility for homeless families, and Extended Care, the organization’s nursing home. They helped teach English at the Adult Learning Center. They learned what happens at the Automotive and Building Trades programs that are part of the New Community Workforce Development Center. They worked with youth as part of the annual summer camp and at the two early childhood learning centers. They did landscaping work and also helped people access services at the Family Resource Success Center.
The students got a lot out of the experience. Tim Garcia called the trip enlightening. As a resident of Cranford, he said he didn’t know much about Newark before.
“This was a great experience. It really taught you about what life is like here,” he said.
Nick Gayle of Montclair said, “The trip showed me a place I didn’t know much about and proved the stereotypes you hear are not really true.”
His favorite part of the week was visiting the Automotive and Building Trades programs at the New Community Workforce Development Center.
In addition to having fun working with the equipment, Gayle said, “The people there felt like they were really a family. It was like the brotherhood I have a Prep.”
The students also got a tour of New Community and Newark with Director of Special Projects Richard Cammarieri. They met with CEO Richard Rohrman and New Community founder Monsignor William J. Linder, who also graduated from Saint Peter’s Prep.
Linder ate lunch with the students on their final day and shared his experiences during high school all the way to the present. He talked about how New Community Corporation came into existence after the turmoil in Newark of 1967 and said that violence of that sort stems from people wanting control over their lives. He told the group that people’s needs are what drives him to continue New Community’s work and mission.
“This trip is inspiring for the students,” Linder said.
Saint Peter’s Prep has been sending students to New Community Corporation as part of its annual summer immersion program since 2013. The students volunteered from Aug. 7 to 11.
Tags: , Adult Learning Center, Cranford, Extended Care, Family Resource Success Center, Harmony House, Jersey City, Monsignor William J. Linder, Montclair, New Community, New Community Corporation, New Community Workforce Development Center, Newark, Nick Gayle, Richard Cammarieri, Richard Rohrman, Tim Garcia