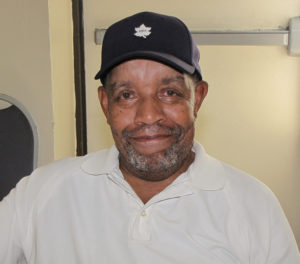 Most mornings you can bet that Charles Berry, a resident of New Community Gardens Senior, will be at the Maplewood Golf Club. It’s not a love for the game that draws him to the green. It’s his commitment to his job working as a golf caddy.

A sure and steady presence, 65-year-old Berry provides course knowledge and information to golfers, locates errant shots, calculates yardage and interacts with patrons of the golf club in a helpful and cheerful manner.

Berry displays that same disposition both on and off the golf course, according to Sister Lucy Modester, assistant care coordinator at Gardens Senior, located at 265 Morris Ave. in Newark.

“He is gentle. He is very hard working. He has a sense of humor,” she said of Berry, who has lived at the NCC building since 2007.

According to Berry, who many friends know as “Chuck,” refraining from picking up the game of golf probably helps him to maintain his calm demeanor.

“I’d get upset and angry and quit,” he said of the notoriously time-consuming sport. Rather, he said, he enjoys being outside, talking to people and, of course, making money.

At Gardens Senior, Berry enjoys playing cards with fellow residents and meets regularly with a group at the first floor community room to play spades, black jack or other card games. Berry actively participates in monthly meetings and if the chaplain is not available, he often opens meetings with a prayer.

He’s been caddying for 14 years but before that, Berry worked as an inspector for U.S. Customs and Border Protection until retiring at age 52. He also previously worked for a tool and dye making company.

A New Jersey native, Berry grew up in Newark and graduated from East Side High in 1970. As a youth, Berry played football as a tight end. He has three grown children and three grandchildren.

Beautifying NCC For Spring Up