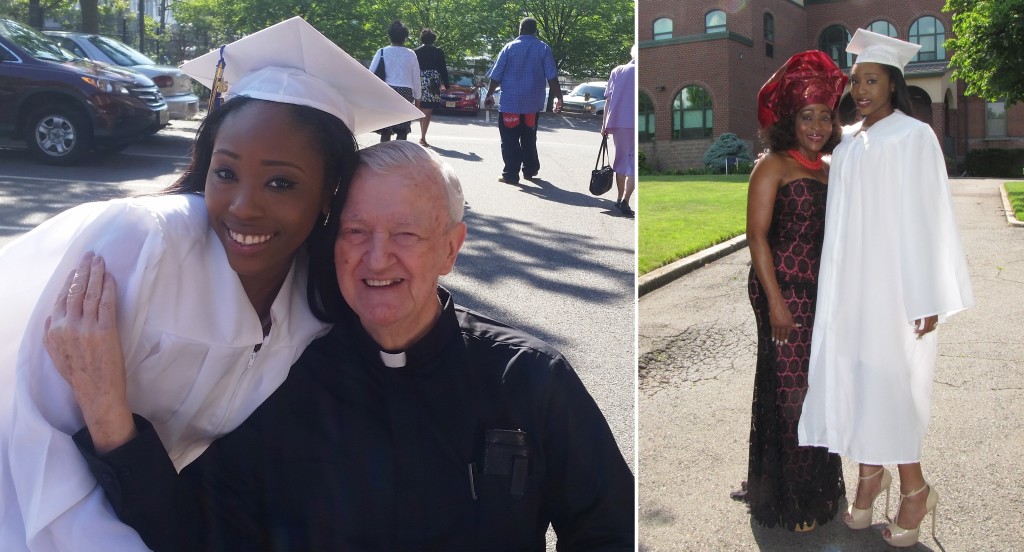 But four years of rigorous college preparatory education at Saint Vincent Academy finally did culminate, and for Onwunaka, the valedictorian of SVA’s Class of 2015, graduation felt like a dream come true.

“My fellow graduates, the time that we have been dreaming about and stressing over for these last four years has finally come,” Onwunaka said in her valedictory address at commencement on June 7 in Newark. “We must now move on and take what we have learned from SVA and bring it to the rest of the world.”

Onwunaka, 18, is the daughter of Veronica Onwunaka, director of nursing at New Community Extended Care Facility. In the teen’s speech, she first thanked her mother for keeping her on track academically and for being a role model. Onwunaka recalled watching her mother “balance her own schoolwork, job and family. Seeing how motivated she is motivated me to worked harder in school,” she said. Onwunaka earned a 4.25 GPA and will begin classes at the College of New Jersey on July 6.

As a recipient of the Monsignor William J. Linder Scholarship, Onwunaka joins the ranks of many young people who have received support from New Community’s founder and board chairman over the years. Scholars who receive financial support to attend prep schools have advanced to college and launched successful careers in a variety of fields, ranging from law and business to medicine and nonprofit work. All 69 graduating seniors at SVA were accepted into college and planned to attend, the school said.

For Monsignor Linder, Onwunaka represents a generation of young people who are ambitious and bold. Onwunaka said she plans to pursue nursing and then become a plastic surgeon who helps children in Africa that are born with cleft palate.

“They really know what they want in life,” Monsignor said a few days after the ceremony. “I feel like I’m part of a new era, which I frankly like. I think it’s a better era,” he added.

The second oldest of four siblings, Onwunaka has two younger sisters at SVA and an older brother in college. She and her siblings grew up attending Catholic schools, which cemented their value in education.

“Father Linder helped us stay in that setting,” Onwunaka said of attending SVA as a Monsignor Linder Scholar. “We’re receiving a good education,” she added.

Veronica Onwunaka noted, “I pushed hard on her…because whatever she did, her sisters (would) follow suit.”

At SVA, Onwunaka was vice president of the Student Forum, co-captain of the varsity volleyball team, served on the prom committee and participated in the African dance club.

Sister Margaret Killough, financial director at SVA, mentored Onwunaka during her sophomore year. “Chioma is a bright, extremely motivated student; I was so proud to see her graduate as valedictorian of her class.  In addition, Chioma is a warm, friendly, outgoing young woman who has much to offer our world,” Sister Margaret said.