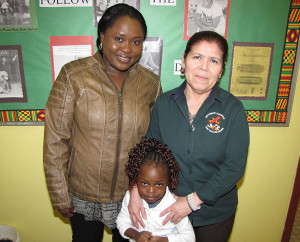 Background: Family Worker Abigail Osorto began working with Mariam Bankole and her daughter, Oyindamola, in September. When Osorto presented information to Bankole on medical technician classes being offered to low income parents that were funded through a state grant, Bankole immediately showed interest. Soon, she registered for classes and now hopes to begin classes later this year. Osorto said that Bankole “has since expressed to me how excited she is about continuing her education and how thankful she is about receiving this information. We are both excited about the positive direction she is taking.” 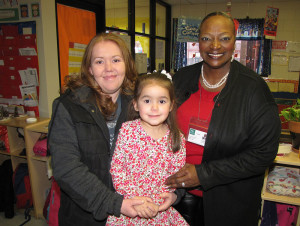 Background: Family Worker Elaine Hoze has known Erica Hall and her daughter, Lisa, since 2011. Hall, who lives with her daughter at NCC Harmony House, a transitional housing facility for homeless families, told Hoze that she wanted to better herself and her situation, so Hoze asked if she would consider going back to school. With guidance from Hoze, Hall enrolled in a course at NCC’s Adult Learning Center and earned her GED. When Hall told Hoze that she wanted to receive training in food service, Hoze gave her information on NCC’s Culinary Arts Specialist Program, which she has since completed. “Ms. Hall’s goal is to become employed and be able to get out of the shelter,” Hoze said. 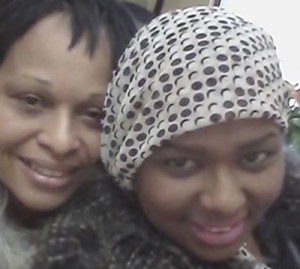 Background: Family Worker Yvette Johnson recently celebrated a major accomplishment of parent Tamyia Mitchell: the grand opening of Mitchell’s second clothing store, called Snazzy Fashion, in South Orange. She said that Mitchell “is the proud owner now and happy to share her dream with other parents on how to accomplish and establish themselves.” Mitchell juggles a busy schedule between her first store, in East Orange, and her second location, but says that Johnson has been a consistent supporter. “She’s very open, she’s always there when I need her,” Mitchell said of Johnson.