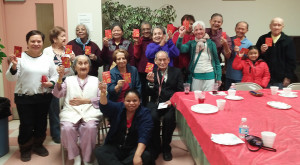 The year of the goat (or sheep) has finally arrived! Residents of New Community Hudson Senior rang in the Lunar New Year on February 19 with a festive gathering to mark the occasion celebrated by many East Asian cultures. This year’s zodiac animal—translated in Mandarin as “yang”—is meant to indicate one’s fortune in the upcoming year. Residents of the building, located in Jersey City, shared a meal that included traditional New Year dishes such as spring rolls, bánh tét (a Vietnamese glutinous rice cake wrapped in a banana leaf), Chinese candy box and Korean barley tea. The meal also included Peruvian dishes, which residents enjoyed as Vietnamese music played in the background. Each attendee also received a red money envelope, which is another cherished custom of the holiday. Photos courtesy of Jasminee Sawh-Ramroop.