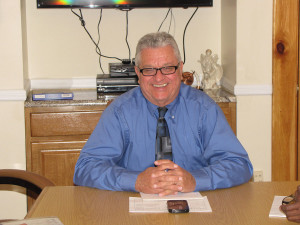 New Community’s CEO, Richard Rohrman, has outlined his priorities for the year 2014 and is aiming to bolster the non-profit’s financial standing, complete a corporate strategic plan, explore new areas of growth and build the internal workings of the organization.

“We want to push the envelope and think about our future, 5 to 10 years down the road,” said Rohrman during a meeting with department heads and managers at St. Joseph Plaza, NCC headquarters, a day after the New Year began.

A blueprint for NCC’s future will be outlined in a comprehensive strategic plan, work on which should commence in the coming weeks, Rohrman noted.

NCC’s philanthropic efforts are also in the process of being reinvigorated with the establishment of a new Office of Philanthropy to be led by an expert in the field, he said.

“In 2014, we will be assembling a group of leaders from the business and philanthropic communities in Newark to help guide the efforts of New Community in the areas of charitable fundraising, volunteerism and community outreach,” Rohrman said.

Rohrman has worked at NCC for close to 20 years, most recently serving as Director of Real Estate Development. He took over as New Community’s CEO on April 1, 2013, from Monsignor William J. Linder, organization founder, who is serving as board chairman. Monsignor founded New Community in 1968 with a small group of Central Ward residents in the wake of the Newark civil unrest that left neighborhoods in shambles.  New Community started its efforts with rebuilding the depleted housing stock and over the years has expanded its services and programming to other areas like education, job training and healthcare.

Today, New Community continues to be recognized nationally as one of the largest and most comprehensive community development organizations in the United States, with its services and programming touching the life spectrum from the period of infancy all the way through the senior years.

Real Estate Development is still a major focal point of the organization and NCC is hoping to move forward in 2014 on several housing fronts. It is applying to the New Jersey Housing and Mortgage Finance Agency for funding to refurbish NCC’s Manor Senior and Manor Family townhouses and apartments in Newark, including the interior units, as well as heating systems, roofing and windows.  The renovation at Manor will total $12 million.

In addition, New Community is hoping to break ground on A Better Life, a planned residence for the chronically homeless that will also provide this population with needed healthcare/mental health services.

New Community is also looking into the feasibility of acquiring abandoned properties and turning them into affordable housing, Rohrman said.

While New Community will be exploring new areas of growth in 2014, Rohrman made it clear that the economic climate dictates a very thoughtful and financially cautious approach when it comes to such ventures.

“We just can’t get into things because we think it’s a good idea…there has to be a plan for these things to be able to stand on their own,” he said.

Internally, Rohrman said policies are being reviewed and strengthened in order to make the organization run more efficiently and effectively. He told his directors and managers he is also open to  “new ideas” that are in line with New Community’s mission of helping inner city residents improve the quality of their lives to reflect individual God-given dignity and personal achievement.

“We have so much talent spread throughout this organization,” he said during the year-opening meeting. “I am anxious to hear your ideas about what projects you think we should be involved in to better serve the community.”

Editorial: James Du Bose: A Man With A Big Heart